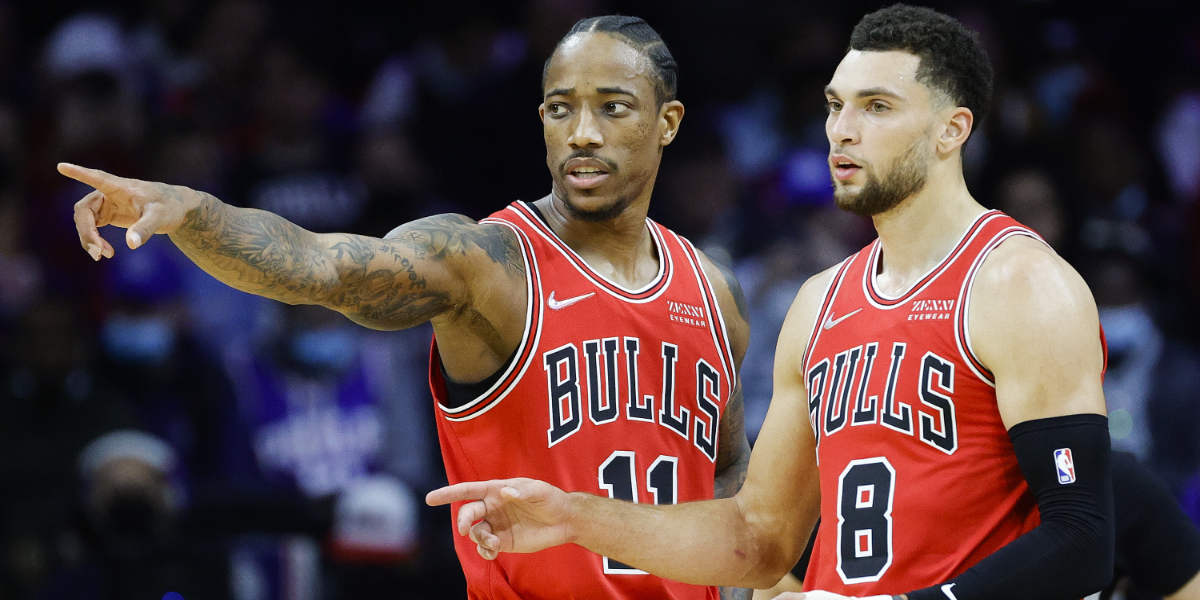 With the Chicago Bulls off to a 9-13 start, it hasn’t taken long for the (sad kind) of trade rumors to pick up steam.

Earlier this week, for example, we learned that the Los Angeles Lakers have had “internal discussions” about potentially targeting DeMar DeRozan and Nikola Vucevic via trade. ESPN’s Adrian Wojnarowski then poured fuel on the fire, reporting that multiple teams around the league have their eyes on the Bulls with hopes that they’ll soon enter full-blown sell-off mode.

Teams are going to have to keep on hoping, though, at least for their biggest stars.

According to Fox Sports’ Ric Bucher, the Bulls have no plans to listen on deals for Zach LaVine and DeMar DeRozan this season.

The Heat and Bulls are in a similar predicament, laden with expensive rosters and high expectations and currently on course to miss the postseason,” Bucher wrote. “But with stars that league sources say they’ve deemed untouchable — Jimmy Butler and Bam Adebayo for the Heat, Zach LaVine and DeMar DeRozan for the Bulls — and role players with outsized contracts — Duncan Robinson and Tyler Herro for the Heat, Lonzo Ball and Nikola Vucevic for the Bulls — their flexibility to make a meaningful addition appears limited.

For however poor this start to the season has been, the front office has remained adamant about fielding a competitive team since they arrived. Reversing course right now – especially after re-inking Billy Donovan and Zach LaVine – might feel a bit premature (and a tad embarrassing).

With that said, I do think the word “untouchable” might be a bit too strong. The Bulls would be wrong to completely ignore calls on someone like DeRozan if things were to continue heading south. Not only has he been one of the NBA’s best scorers over the past two seasons (that’s value), but he has only one more year left on his deal (that’s expiring value). If they don’t plan to extend him, now might be the best opportunity to maximize his value in the marketplace/to the organization.

Again, I don’t foresee them choosing this route at the moment, but we all know how fast things can change in the NBA.

(Michael: There’s also the very real possibility that this is mostly a play for leverage from a team, the Bulls, that knows they may soon find themselves as pretty obvious sellers. You don’t need to help the bargaining position of any potential buyers even more than the Bulls’ record already has).

The last thing we should note here is that Nikola Vucevic isn’t currently considered “untouchable.” While Bucher did imply that his contract could be a bit hard to trade (I don’t how true that is when we consider he’s making a reasonable $22 million), this shouldn’t be some kind of major surprise. If the Bulls were to pivot, but still had their sights set on winning, finding a more defensive-minded center to help counterbalance the scoring ability of LaVine and DeRozan would make sense. Not to mention, Vucevic is in the final year of his contract, so now might be the time to get something in return for his services if he’s no longer part of the future plans.