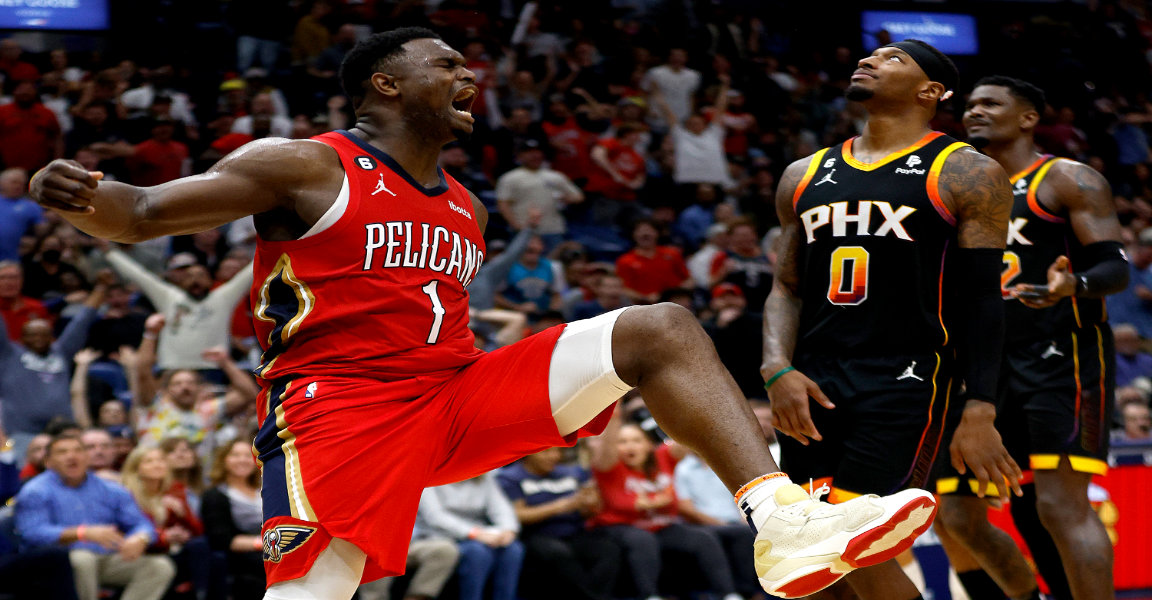 If you know me, you know that I love a great underdog story. Seeing the Sacramento Kings do some really fun things has been my early favorite NBA story this season. But, Zion Williamson’s redemption tour and the arrival of the New Orleans Pelicans as contenders in the Western Conference may be inching closer to the top of my list these days.

Have the Pelicans Arrived?

Zion Williamson’s emphatic slam dunk with the game already in hand during Friday night’s 128-117 victory over the Phoenix Suns was the talk of the NBA world over the weekend.

The Suns weren’t happy about it, the Pelicans didn’t seem to care much.

After the game, Williamson said that the dunk was out of character for him, but there was a lot of emotion behind it.

“That was a little out of character for me. But you gotta understand, they sent my teammates home last year… But I was in that locker room, my brothers was down because the Suns sent us home last year.”

That’s the emotion of a 22-year-old former No. 1 overall pick who missed last season with an ankle issue and was mocked relentlessly on social media about his weight, durability, work ethic, and passion for the game. All while he also watched his team scratch and claw their way into the NBA playoffs for the first time since Zion arrived in NOL, only to see the Suns oust them while he watched helplessly.

The emotion was understandable. The encore was even more emphatic.

Zion led all scorers with 35 points on 14-of-21 shooting and led the Pelicans to a 129-124 victory over Phoenix, capping a weekend home sweep against the Suns. Larry Nance Jr. said that the Suns are a team that the Pelicans are trying to surpass, a team with a recent resume that they desire. The Pels sit atop the Western Conference this afternoon with an 18-8 record, which begs the question: Have the Pelicans arrived?

New Orleans sure seems like a legitimate contender in the West right now. They’re fifth in the league in offense, third in defense, and Zion Williamson is on a ferocious redemption tour to remember. Williamson is averaging 30 points, 9.2 rebounds, and 4.8 assists per game on 65.3 percent shooting while playing 34.5 minutes per contest.

I think C.J. McCollum said it well on Twitter; the praise for Zion should be as loud this season as the criticism was last year.

Pistons Lose Cunningham for the Season

The Detroit Pistons learned this week that they will be without 2021 No. 1 overall pick Cade Cunningham for the rest of the season. The second-year guard elected to address a stress fracture in his left shin with surgery. Cunningham had been sidelined since November 9 with the injury, officially ending his 2021-22 season after just 12 games played.

With Cunningham — who averaged 19.9 points, 6.2 rebounds, and 6.0 assists this season — done for the year, the 7-22 Pistons are in a spot where they can engage in yet another tank-a-thon season. It seems like an obvious move. Detroit can sell off guys like Nerlens Noel, Bojan Bogdanović, and maybe third-year forward Saddiq Bey, or veteran big Alec Burks before the deadline and add to their future currency.

But James L. Edwards III, who covers the Pistons for The Athletic, believes that might not be as much of a slam dunk as one would think. After all, everyone thought that Detroit would flip Jerami Grant ahead of last season’s trade deadline, but Detroit held onto grant and traded him to Portland in July for Gabriele Procida (the No. 36 pick in the ’22 NBA Draft), a 2025 first-round pick (via Milwaukee), and a pair of second rounders in 2025 and 2026.

So, maybe the Detroit front office isn’t as desperate to deal as we would imagine, even with Cunningham lost for the season?

We know that Bogdanović has been a target of the Los Angeles Lakers, who reportedly offered Detroit a future-protected first-round pick earlier this week. However, Edwards believes that Detroit may want to keep him around for the immediate future with the Pistons feeling like their rebuilding process is due to turn the corner sooner than later. Detroit gave Bogdanović an extension this past offseason, so that seems to align with Edwards feel on the situation. Still, turning down a future one for Bogdanović seems like a move I might not personally make.

Edwards shares what he’s hearing on Bogdanović, Noel, Burks, and Bey in his recent column:

Ball is Back! (no, not that one, Bulls fans)

Speaking of the Pistons, it appears that they’ll be the first team to see LaMelo Ball in his first action in a month, according to Shams Charania.

Ball missed 11 games after re-injuring his ankle against the Pacers on November 16 after playing just three games on the heels of returning from the original ankle injury suffered in the preseason. Ball averaged 19.3 points on 41.5 percent shooting to go along with 7.0 assists and 3.7 rebounds in three contests against the Heat, Magic, and Pacers.