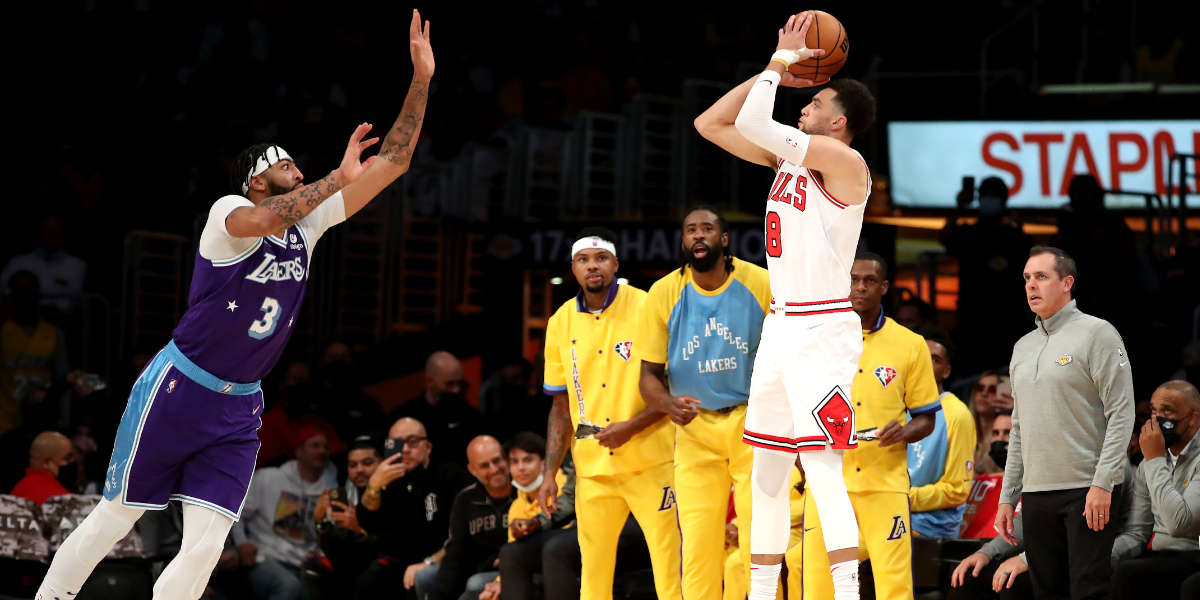 At this rate, Zach LaVine will be 53 years old and the Lakers will be begging him to sign a 10-day contract.

LaVine-to-LA talk was all the rage during the NBA offseason, with rumors swirling about the Lakers’ interest in the UCLA and West Coast native (plus, LaVine didn’t do much to help quiet the noise). Even then, however, the odds of the Lakers landing LaVine felt thin due to their lack of cap space and tradable assets. And that still feels true about five months later.

But that hasn’t stopped some of the NBA’s loudest voices from trying to speak a potential LaVine-Lakers trade into existence. Indeed, the latest came from ESPN’s Zach Lowe and Bobby Marks on The Lowe Post podcast. Lowe pitched the idea of Chicago trading LaVine to the Lakers in exchange for their 2027 and 2029 first-round pick, as well as Russell Westbrook’s $47 million expiring deal. He added that one of the picks would be unprotected, while the other would have light protections.

To be absolutely clear, no, this isn’t a report (i.e. this isn’t a rumor Lowe heard and is passing along). He’s merely pitching this idea to Marks as a deadline thought experiment, and both ultimately settled on the Bulls *not* going through with such a trade.

Having said that, they both agreed that the trade was at least something the front office would have to consider if the Lakers offered it. More specifically, Marks said, “I would probably consider it because I don’t see this roster … I don’t see it getting into that top-4 or top-5. I think there has to be some kind of pivot here with this group.”

Two things can be true: (1) The Bulls should look to shake up this roster and make “some kind of pivot.” (2) Trading LaVine to the Lakers for two first-rounders and Russ isn’t the right move.

I recognize how valuable those picks appear to be in the marketplace. The Lakers have only a couple more years of this LeBron James era before they’re going to have to reinvent the roster. There is absolutely a world where both the 2027 and 2029 picks are top-10-caliber. But there is also a world where the Lakers attract another big-name free agent or player via trade and they’re still sitting in the playoff mix. After all, they are one of the biggest franchises and markets in professional sports.

All I’m saying is that I’m not sure moving LaVine for two picks that will not convey for at least five years is a best-case scenario. Again, the picks could eventually hold a lot of value, but LaVine is also a 27-year-old two-time All-Star who is widely considered one of the best three-level scorers in the game. Maybe he isn’t a true superstar, but players with his skill set and upside have netted more in the trade market in recent years.

I’m not declaring that a LaVine trade should be completely off the table. While I’m still high on his potential to be a winning piece (this recent 11-7 stretch was thanks largely to his contributions), there are fair concerns about his long-term health and the hefty contract. It’s always nice to get off a deal before a player begins to deteriorate or plateau. But I don’t think the Bulls have to blow things up that much this fast.

If the goal is to reinvent this roster, Nikola Vucevic and DeMar DeRozan should likely be on the block first. At least wait until a year or two is off LaVine’s deal and he potentially has a chance to increase his value even more with some healthy, productive basketball.

Anyway, I’m going to stop there. The point of this post isn’t to talk about what a Zach LaVine trade could look like. I don’t foresee that happening this season – even if the Lakers really want it to.