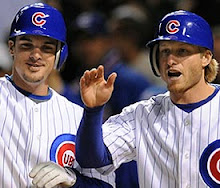 Yup. You read that correctly.

But you didn’t read it from me. I’m just repeating what ubergenius Kent Sterling (who? – some dude who runs Indianapolis’ ESPN radio station) said last week about the Chicago Cubs.

There aren’t real words to react to that assertion. It’s… it’s… whahell?

Forgetting the fact that Mark Belanger won exactly one world series – a series in which he hit a sprightly .105 – it seems a tad nutty to say a team has to be full of champions to be, um, champions.

It gets into even more unbelievably absurd assertions after the jump.

What prompts my death sentence for the 2009 season is the signing of Michael Wuertz.  Wuertz is not a guy who will pitch for a champion.  Period.  That Jim Hendry believes Wuertz can help shows what he looks for in a reliever.  Wuertz eats innings.  That’s it.  Up or down 9-3, Wuertz comes into the games to mop up.  I understand the need for a mop up guy, but the pitcher in that role should be someone who might get somebody out if the studs get hurt, or in one of those 15-inning games.  Wuertz throws a slider, and that’s it.

The guy acts like the Cubs made Wuertz their big time free agent signing of the year. The Cubs gave a contract to a guy they already had under control. The signing of an arbitration-eligible pitcher, in lieu of RELEASING him, is what makes the Cubs a loser this year. This is so beyond the pale of ridiculosity, I don’t know how to respond.

Fortunately, the Cubs responded for me yesterday, by doing what *everyone* knew they could and might do when they signed Wuertz – they traded him to the Oakland A’s. Because he was just a freaking reliever.

Ronny Cedeno will never play on a winner.  He’s not the kind of player who wins.  He’s just good enough at everything to hang around, but he rarely helps you win.  He is a plus guy at nothing.

Yup. And that’s why he was traded – again, as everyone in the world who knows anything about the Cubs knew was going to happen.

But the piece de resistance, was this unbelievable assertion:

I’m going to guess that the Cubs are the only team in the majors with three infielders and three outfielders listed at under six-feet tall.  How many short white position players does it take to hoist a championship banner?  Cubs fans better hope the answer is six.

How can someone in the mainstream media get away with saying something so patently absurd, and baldly racist? He’s saying a team can’t win if they’ve got too many short, white guys. This is even more ridiculous – and obviously offensive – than his whole “the Cubs can’t win because they don’t have champions” drumbeat.

When a writer says, “the Cubs won’t win because they are made up of guys who aren’t champions,” I can laugh that one off. It’s such a silly, circular assertion that it’s the kind of thing you’d expect to hear in a bleacher argument among guys who are too drunk to stand.

But when he says that the Cubs won’t win because they have too many short, white guys? I’m not going to laugh about that one. That merits us calling him on it.