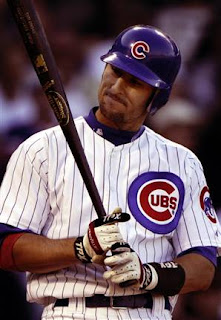 The Chicago Cubs are still looking for a 25th man to round out their roster. Right now, four of the five bench spots look relatively locked up in the form of outfielders Reed Johnson and Joey Gathright, backup catcher Paul “The” Bako, and infielder Aaron Miles. Currently, the team does not have a true backup at shortstop or first base. Micah Hoffpaiur could back up first, but almost nowhere else, and Miles could probably handle the role, but the Cubs are obviously still looking.

So what about a blast from the past? Perhaps the single most highly-anticipated player in the history of the Cubs, who ultimately was a complete let-down due to injury. Oh wait. That describes like 15 former Cubs.

I’m talking about Nomar Garciaparra. He’d actually be a pretty awesome option – and the Cubs are interested. Explained, after the jump.

The Cubs have already approached Nomar about the possibility of coming back to the Cubs, but at the time, he was still looking for a starting gig. As we approach spring training, and the availability of such a role diminishes, maybe he’d start to consider a utility spot with the Cubs. Bruce Levine reported yesterday that the Cubs remain interested in Nomar.

I know what you’re thinking.

And not only *can* Nomar play short when needed, he played it 31 times… last year! More importantly, according to Baseball Prospectus, he was only slightly below average defensively there – basically in line with his career average defensive performance.

The most common name suggested as the Cubs’ primary infield backup after Miles is Rich Aurilia. Sure, Aurilia is probably going to put up better offensive numbers than Nomar this year, but Aurilia didn’t play shortstop at all last year. And in 2007, he played just 12 games there.

Assuming equal cost, it seems like Nomar is the more prudent choice for the Cubs. He can play, quite literally, anywhere on the diamond in a pinch. And in a utility role, he’s less likely to be be plagued by the injury issues that are the primary knock against him.

So come on, Nomar. Accept a utility role on the best team in the National League. Mia loves Chicago, right?