Luis Vizcaino to the Oakland A's for Bobby Crosby? Skip to content 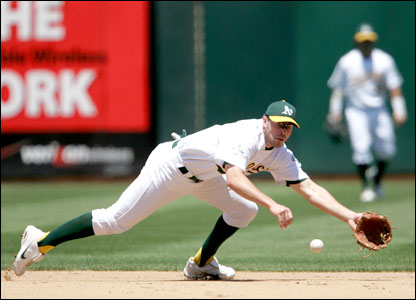 But as he struggles mightily in Spring Training, Lou Piniella has indicated that his job is not safe. Because Vizcaino is set to make $3.5 million this year (and a $500k buyout next year), it’s highly unlikely that the Cubs will DFA Vizcaino at the end of Spring, and eat his salary.

Far more likely, if the Cubs decide Vizcaino is not going to make the team, is that they’ll look to deal him. That will involve either eating a big chunk of his salary, or taking on a terrible contract.

A contract like that of Oakland A’s shortstop Bobby Crosby.

As we recently noted, the Cubs have been scouting Bobby Crosby since he became available (due to the A’s signing Orlando Cabrera), with an eye at the 25th spot on the bench. Crosby, however, is due $5.25 million this year, making him very unattractive (so does his clearly-in-decline skillset).

But if the A’s have any interest in picking up a right-handed reliever (and my highly uneducated investigation into their pen suggests they might) and saving a little bit of cash, a Crosby-Vizcaino swap makes a lot of sense from their end. Paul Sullivan agrees:

The Cubs chances of trading Vizcaino are slim because of the overpriced contract, though if they packed him with a prospect they could explore a deal with Oakland for shortstop Bobby Crosby, who makes $5.25 million and is being shopped after the Orlando Cabrera signing.

Obviously it’s all very hypothetical, but this is nearly the only approach – short of the A’s eating nearly all of his contract – that a trade for Bobby Crosby makes any sense.

I have disagree with Sullivan’s assessment that it would take a prospect to get the deal done. If the Cubs took on all of Crosby’s contract in the deal, it is unlikely more of an incentive would need to be offered.