Milton Bradley is Fragile: Out for Three to Five Days Skip to content 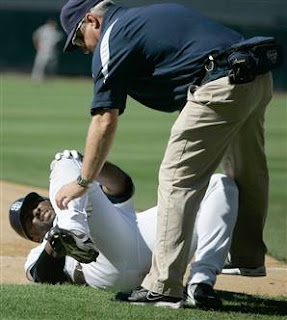 The Chicago Cubs have always been persnickety about sharing injury information, but with Milton Bradley a veritable treasure trove of injuries, they’re going to have to open up a bit more.

After Bradley left Sunday’s game early with an unknown injury, it took a little while to get definitive word on the nature and extent of the injury. Neither are particularly good.

Team officials said Milton Bradley’s groin strain will keep him on the bench three to five days. Best bet is for him to return sometime next weekend against the Cardinals.  ESPN Chicago.

Three to five days for what was previously called a mere tweak? Yikes. I’d hate to see the damage if (ok, when) Bradley actually pulls something, tears something, or breaks something.

I know this is to be expected, but it isn’t as if Bradley has a touchy groin. What I mean is, all of his injuries – and they are plentiful – have generally been disconnected. It’s not like a guy who missed action every year because of a bum knee. He misses substantial time with all kinds of ailments.

I’m not going to criticize or question a man I don’t know (that’s per your request, Milton), but I will stick with my title for these pieces until evidence indicates otherwise: Milton Bradley is Fragile.