The Cubs Have an 88-Year Old Blind Cardinals Fan Scouting the Padres - No, Seriously
Search
Skip to content 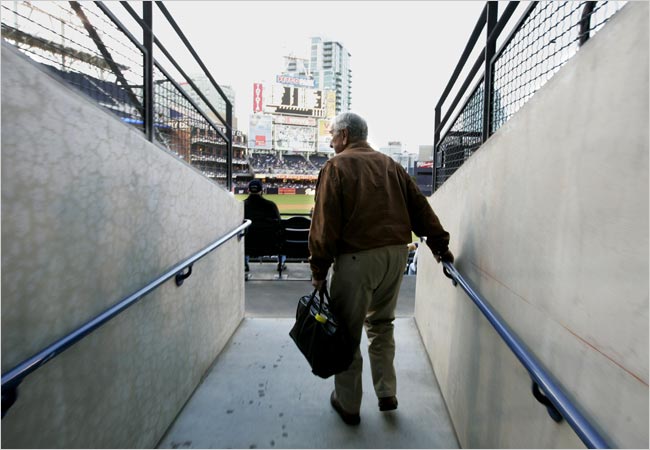 The last two decades of professional baseball have been marked by many things – steroids, dramatic salary increases, lavish ballparks. But one of the defining elements of the era has been the schism between those who still ascribe to the “scouting” method of talent evaluation, and the new breed of statistic/sabermetric hounds. The former focus on what their eyes tell them, the latter focus on what the numbers tell them.

Naturally, that’s a simplistic take, and all teams nowadays would fall into some hybrid category. Be that as it may, most lean in one direction or the other.

It’s no secret that the Chicago Cubs are decidedly in the “scouting” camp. Whether it is the bricks and mortar – quite literally – history and tradition of the team, or the top-down influence of general manager Jim Hendry, a former scout, the Cubs routinely make decisions based on things like “athleticism,” and “fit,” and “baseball instincts.” I won’t dismiss these factors wholesale from my Laptop Tower, but I must confess that I generally meet them with a mild snicker, and a quick jaunt to Baseball-Reference so that I can check out what really matters.

Against that backdrop, I offer you this: the Chicago Cubs currently employ the services of an 88-year old blind Cardinal fan to scout the San Diego Padres.

This is the second season [88-year old, Cardinal fan Dave] Garcia[, who suffers from macular degeneration,] is helping the Cubs, namely Gary Hughes, a special assistant to General Manager Jim Hendry. Hughes tells Garcia what the Cubs need — lately it has been a backup infielder — and that is where Garcia fixes his gaze. As best he can, that is.

“I can’t see the ball leave the pitcher’s hand,” Garcia said. “I can’t see where the pitch is when it was hit. But for some reason, when it is hit, I can pick it up.”

Hughes maintains that Garcia still has a knack for spotting talent and gathering information. “I just pick his brain, really,” Hughes said. “We talk about comparisons. He’s way more of a source than he thinks he is.” NYTimes.com.

Now, before I criticize, I want to be clear: I think this is obviously a great thing for Mr. Garcia. Baseball is his life, his passion – his baseball career in 1937. And that the Cubs allow him to keep that connection to the game is laudable. I doubt the Cubs even pay him.

But aside from the absurd recoil that results from even typing the sentence, “the Cubs have an 88-year old blind Cardinal fan scouting the San Diego Padres,” I can’t help but feel like there’s something lurking there behind the sweet, fluffy story. Something ill-fitting. Something sinister.

I think Gary Hughes really means it when he says Garcia still has a knack for spotting talent, gathering information, and helping the Cubs. I think even if Garcia weren’t 88, weren’t tied romantically to the game, and weren’t a generally likeable guy, the Cubs would still gladly employ his services.

Do I think Garcia has probably forgotten more about baseball than I’ll ever know? Sure (though I’ll avoid the obvious jerk opportunity to say something like, “yeah, he’s forgotten it.” Oops. Just said it.). But there’s a sense that this is how the Cubs operate: this guy is a part of the baseball kingdom, he knows his stuff because he’s been around forever and everyone likes him, and so we should listen to his talent evaluation even though he can’t really see the game.

It’s uncomfortable to say these things. I’m sure Garcia is a great guy, and the actual, practical impact of his scouting is minimal. But I simply cannot help but believe his employ makes a statement about this franchise. About its methods. About its priorities.

We all love Wrigley Field. The beauty, the history. It is exciting to know that we’ve been watching the Cubs in the same place for decades. The tradition is meaningful and is an important part of why we are proud to be Cubs fans.

But we’ve all also heard the calls for the improvement, updating, or even moving, of Wrigley Field. Many feel that the ballpark, like the team, is in frightening need of updating. Tradition has value, but that value feels increasingly unimportant in the face of another year that the Cubs don’t win.

So when I read about something like Dave Garcia, I smile, and then I cringe just a little.

Is Garcia a part of the tradition, or a part of the winning? And why do I feel, as another year passes, that the two have become mutually exclusive.