A Ramirez Return Worth Cheering For Skip to content

When Manny Ramirez returned from a 50-game steroid suspension, Los Angeles Dodgers fans cheered as though he’d returned from a terrible injury after months of rehabilitation. The hero returns.

When Aramis Ramirez returned from a terrible injury after months of rehabilitation, Chicago Cubs fans cheered just as loudly. And they did so without that tiniest twinge of guilt that no self-respecting Dodger fan could avoid – not that any would ever admit it.

When I saw Manny’s press conference – the one following his absolute sham, borderline criminal, minor league stint – and he gleefully announced “I’m baaack” to an equally gleeful crowd, I felt sick. As child who’d just been caught with his hand in the cookie jar, Manny chuckled. Tee hee. I’ve been a pwetty bad boy. Tee hee.

For Manny Ramirez to return to the Dodgers as though he’d been on an extended rehab assignment – one that featured live look-ins from ESPN every time he stepped to the plate in A ball – and to be treated to a hero’s welcome sickens and saddens me. Perhaps I’m being melodramatic – I’m prone to fits of it. But I can’t help how I feel. Or what I know.

I know that as Aramis Ramirez, the Chicago Cubs’ Ramirez – our Ramirez – returns from months away, I can cheer at the top of my lungs with a perfectly clear conscience. And I can smile. I sure did when he hit his first home run after coming back.

I know it’s just a game. And these are just two men playing a game. But for those of us to whom baseball means a little something more, we know that at least one of those men is playing it the right way. 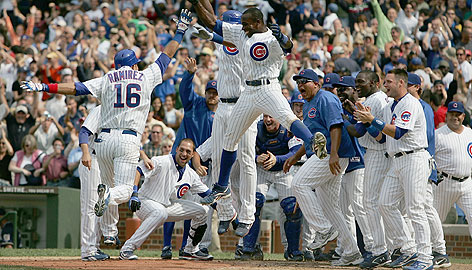 Probably, neither are heroes. At least not simply by virtue of their return to their respective teams. But should each Ramirez become a hero in the second half of the season, only one will be worth cheering for. If Aramis Ramirez somehow manages to carry the Chicago Cubs on his back this year, there can be little doubt that he’ll be doing it without any assistance.

And should Manny Ramirez lead the Los Angeles Dodgers to victory, he’ll no doubt be treated to a continued heroes welcome – as he has for three weeks now. He’ll titter, and joke with the media with that churlish look. And he’ll smile. The fans will cheer.

And so will I; as I watch Aramis Ramirez step to the plate.