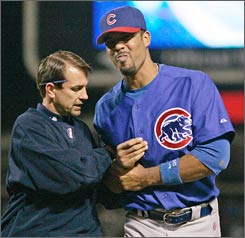 With all of our obsessive watches here at Bleacher Nation (Rich Harden’s shoulder, Aramis Ramirez’s dislocation, and of course, all things Jake Peavy), it is surprising that we haven’t yet begun a Derrek Lee neckwatch. After all, the Chicago Cubs first baseman has missed many games – albeit usually one or one half at a time – with a bulging disk in his neck. When he was removed once again on Saturday against the Reds, it was time to create the watch.

“I’ve never seen that, where a player gets stiffness in the neck from sliding,” said Piniella before Sunday’s game. “He’s going to have to be careful with that the rest of the year.”

“Derrek plays the game the way it should be played,” said Piniella. “This guy here is a professional. He knows what he needs to do. But when he slides a certain way he gets jarred and he gets stiffness in the neck.” CHICAGO SUN-TIMES.

The good news is that Lee is expected back in the lineup today against the Astros. The bad news is that he is obviously going to struggle with this problem for the rest of the year – and despite moderately adequate fill-ins existing in Jake Fox and Micah Hoffpauir, the Cubs will need Derrek Lee down the stretch.