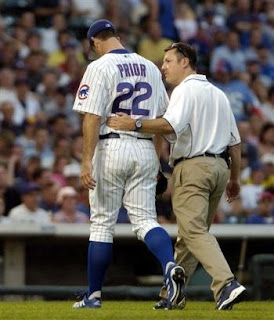 Last year, Mark Prior was on a big league deal with the San Diego Padres as he rehabbed from another shoulder injury and surgery. This year, he returned to the Padres on a minor league deal, still trying to make it back to a big league mound.

It didn’t work out, and the Padres released Prior, even from his minor league deal.

But Mark Prior remains undaunted, and says he plans to return to Major League Baseball some day. It’s one part inspirational, and two parts really sad and pathetic. Like when a bird keeps flying into a glass door, not quite realizing that it will never be able to reach the glory inside that it seeks.

“First of all, I haven’t given up on my career, by any means,” said Prior from his home in San Diego. “I had a setback with my shoulder in May and I totally understand why the Padres decided to release me, because they knew I couldn’t pitch this season.

“I have nothing but respect for the way the Padres, Kevin Towers and Buddy Black and the Padres staff dealt with me. The team cares about its players and does a great job in dealing with the players.”

“I look back [on my time with the Chicago Cubs] and I don’t have regrets, because I know I always gave the best of what I had to give. In 2003, we had a chance to be in postseason play and I think that helped to change the mind-set of the Cub franchise,” said Prior.

“I realize there has been a lot of attention on the high number of pitch counts when I was with the Cubs, but I don’t sit and wonder about all of that. Pitching is a fragile business and you can’t point to any one thing related to a career,” added Prior

For Prior, his focus today is more on pitchers like Pedro Martinez of Philadelphia and Chris Carpenter of St. Louis than Strasburg.

“I see how Pedro and Chris have battled back from injuries and I respect what they have done,” Prior said. “It also gives me hope.

“I will do everything I can to prepare myself to pitch in the Major Leagues again. I know I have the ability and I haven’t given up on myself in any way.” MLB.com.

Prior is only 28, so I suppose it is theoretically possible that he could come back some day. It’s unfortunate that the very same body that supplied his unparalleled physical ability has now also robbed him of any real hope of realizing the full extent of that ability.

Chicago Cubs fans have had a tough relationship with Prior. Certainly, he was unfairly punished for getting hurt on the heels of such hope and promise. But he was fairly punished for his stubborn and money-driven reluctance to have surgery much earlier in his rehabilitation process, and for his comments that he was “just an employee” of the Cubs.

Personally, I wish him the best of luck. But secretly, I can’t wish it with my whole heart: for him to succeed somewhere else would be the final needle in the whole Prior saga. I’m not sure I can take it.