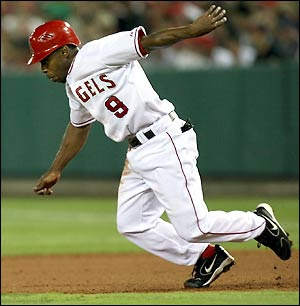 You know that the 2009 season is officially over for a team when the rumors about their off-season moves begin to swirl.

For the Chicago Cubs, it’s going to center on the bats. And the first name to pop up is Los Angeles (of Anaheim, of California, in the West, near Disneyland, not Disney World) Angel third baseman / outfielder Chone Figgins.

Asked if Kosuke Fukudome would be his leadoff man in 2010, Lou Piniella replied: “It’s a possibility. I would think that we’d probably try to add more speed, but we’ll see. That’s just a conjecture, nothing more, nothing less. But if not, certainly Fukudome would be a candidate.”

“There’s no sense talking about next year yet,” Piniella said. “We’ve got 28 games to go. But speed is something [we need]. We’re last in baseball in stolen bases. That tells you a little something.” chicagotribune.com.

Figgins’ career OBP is closer to .360, but, along with his versatility, remains his greatest strength. Still, he’ll be 32 next year and will command a healthy, multi-year deal.

So, yes, Figgins would be a nice pick up. But let’s cool it with the speed, Dusty. Er. Lou.