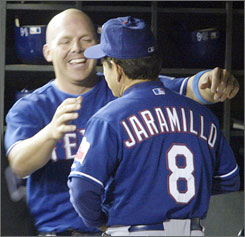 Hitting coaches generally receive too much of the blame when a team isn’t hitting, and generally do not have a huge impact in the positive direction, either. Jaramillo, however, is considered an exception.

Jaramillo is the absolute perfect man for the Cubs’ situation. He has worked successfully in the past with both Alfonso Soriano and Milton Bradley, the latter of whom is no guarantee to be eliminated over the offseason unless general manager Jim Hendry releases him at a cost of $21 million. And he is well acquainted with manager Lou Piniella from the years Piniella spent in Seattle and Tampa.

This marriage should be a slam dunk, even if the Cubs offend other teams by paying Jaramillo at a premium.

The Rangers have paid heavily in the past for coaches, digging deep to keep Jaramillo when his last contract expired and then reportedly giving Mike Maddux an extra $100,000 to convince him to leave the Brewers last winter. If you don’t think coaches can make a difference, then you didn’t notice how much the Rangers’ pitching improved this season while the Brewers’ declined.

Jaramillo is the same kind of difference-maker. He has spent 19 seasons as a major league hitting coach with the Rangers and Astros, and his teams always have been near the top in run production. As a minor league hitting coach, he worked with players such as Sammy Sosa, Juan Gonzalez and Ivan Rodriguez, and he was an influence on Craig Biggio and Jeff Bagwell in Houston. chicagotribune.com.

Jaramillo is under contract through October, so nothing will happen until the end of the month.