In Case You Needed a Kick in the Crotch: Cubs Playoff Disasters of the 2000s Skip to content 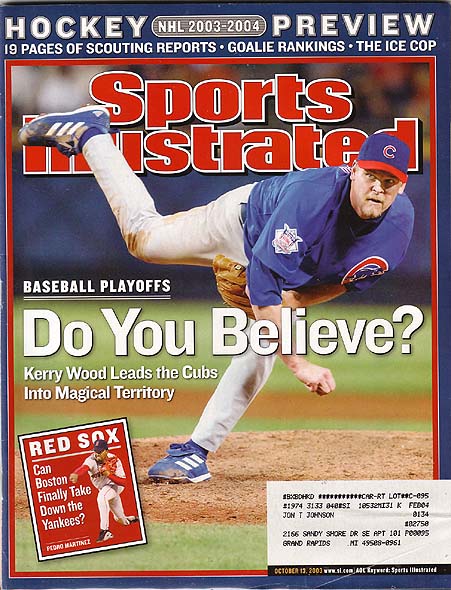 This may come as something of a surprise, but the 2000s were not kind to the Chicago Cubs. Sure, they were more competitive in this decade than any of the previous several decades (and spent a whole lot more, but that’s another discussion). But who can deny that the 2003 heartbreaker, the 2004 unbelievable swoon, and the back-t0-back embarrasweeps in 2007 and 2008 made it a tough decade, like all others, to be a Cubs fan?

And in case you had just managed to get over all of that, and were turning the page on a new decade, Yahoo is here to step on your grapes. The Big League Stew blog has offered its top 10 playoff disappointments of the 2000s, and hey, what do you know? The Cubs figure prominently.

The symmetry seemed too perfect. One hundred years after winning their last World Series title, the Cubs held the National League’s best record and were among the odds-on favorites to reach (and actually win) the Fall Classic. The hope in Wrigleyville was palpable but the rest of the nation knew where this was going as the 84-win Dodgers came out of their corner at Wrigley Field with two strong rights. They then delivered the sweeping knockout punch at Dodger Stadium, ensuring that the rooftop Eamus Catuli sign would have to add another digit for the longest drought tracker in professional sports.

At the time, it seemed like anything *other* than a sweep was possible. Having been swept away the previous year by an arguably better Diamondbacks club, the 2008 Cubs were different. They were better. They were … swept. Again. Truly a wtf moment in Cubs history.

The nightmarish memory is rivaled only, in recent memory, by the 2003 NLCS against the Florida Marlins. Once again, thanks to Big League Stew for the reminder:

Five more outs! Five more outs! Your humble blogger was in the upper deck of Wrigley Field on a cold October night, ready to hit send on a Kansas City Star story that summed the Cubs’ first trip to the World Series since 1945 by touching upon Mike Royko, Nelson Algren, the wreck of the Edmund Fitzgerald and the great Chicago fire. Then Steve Bartman, Alex Gonzalez, Dusty Baker and Mark Prior happened and I was sent into a rewriting tizzy.

Good thing New Year’s Eve is just a couple days away. I need a drink.