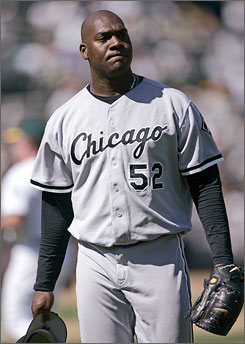 Jim Hendry’s never-ending quest to add a “veteran” “right-handed” arm to the bullpen has turned toward the lower cost end of the spectrum, which is a good thing.

Hendry — whether via trade or free agency — wants to add a veteran bullpen pitcher. Former White Sox right-hander Jose Contreras has been a part of Cubs talks with agent Jaime Torres.

Contreras would bring a certain amount of protection for the team, considering the unknown status and availability of rehabbing left-hander Ted Lilly, who underwent shoulder surgery in November. He may not be at full strength until mid or late April. And that’s where Contreras comes in.

After the Sox shipped Contreras to Colorado in late August, he had solid numbers — 1.59 ERA in 17 innings pitched — in helping the Rockies reach the playoffs. Listed at age 39, his real age is could be anywhere from 40-45, nonetheless the Cubs are looking at him as protection for Lilly, and also to push the No. 4 and No. 5 spots in the iffy bottom of the rotation. ESPN Chicago.

Contreras would likely not net a large contract – he’d get a one-year deal for minimal cost, or perhaps even just a minor league deal and Spring Training invite. Either way, the risk to the Cubs is small, and the upside is solid. Even though he was bad enough with the White Sox last year to get dumped, he was still better than Carlos Silva. Before that, he was simply good in his time with the White Sox. In a swing role, he could be valuable to the Cubs.

Then again, so could Sean Marshall, Tom Gorzelanny, Mike Parisi, and the list goes on – with the lesson being: don’t spend much money to add a player like this.