Mark Prior is Still Coming Back Skip to content 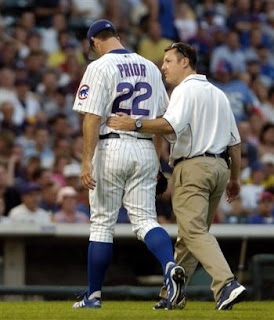 Eventually, for it to be called a comeback, you have to, you know, come back.

Just because you haven’t heard Mark Prior’s name in a while — like possibly since 2006 — doesn’t mean the one-time Cubs prodigy is retired. Heck, no. Prior won’t even turn 30 until this September. And he’s carefully working his way back from his second shoulder surgery, trying to make one more comeback.

It’s slightly more than 20 months since Dr. James Andrews performed that most recent operation, to repair a torn shoulder capsule. Now Prior’s agent, John Boggs, tells Rumblings that Prior is throwing off a mound in California, trying to ease his way back to health.

“Mark has been through so many timelines, at this point I’m almost allergic to the word,” Boggs said. “But he’s out there. He’s getting himself ready. And when he’s ready, I’m sure you’ll hear a lot about him. Then we’ll invite teams to come watch him throw. And hopefully, he’ll be the next Ben Sheets.” Jayson Stark.

Sheets was rehabbing for a year and was never really out of baseball. Prior hasn’t pitched in the bigs in three years. There’s a difference, and it’s undeniable.

We tend to scoff at Prior’s comeback efforts – and we probably deserve to, having been particularly burned – but it’s ironic: this week the Cubs are going to scout Noah Lowry, and many fans were excited about the prospect of landing Lowry on a low risk deal. Lowry hasn’t pitched in the majors since 2007, and when he did, he was never even close to the pitcher that Mark Prior was. Yet we still get a little excited.

So maybe a Mark Prior comeback isn’t as ridiculous as it sounds.