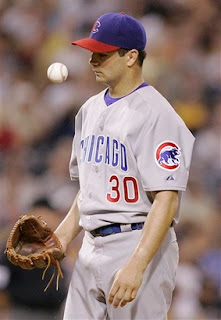 Chicago Cubs starting pitcher Ted Lilly had knee surgery last summer to clear up some minor issues. So the fact that, when he threw for the first time in several months this week, he had some pain in his knee is no surprise.

Except, his prior surgery was on his left knee. This pain is in his right knee. Crap.

“Hopefully, it’s just a minor little thing,” Cubs manager Lou Piniella said of Lilly’s knee. “As far as his shoulder is concerned, he’s gaining strength and feeling good. We’re just having to hold him back so he doesn’t take a step backwards.”

Lilly was to be examined late Thursday. He said his knee was “barking a little bit.”

“I ran on it yesterday, and it’s not something I’m going to make a big deal out of,” he said. “I’m just going to have it looked at.”

Last July, Lilly needed arthroscopic surgery on his left knee, and he joked Thursday that maybe he’s a little “fragile.”

His shoulder, though, feels strong.

“My shoulder feels good, and I’m real optimistic about that,” Lilly said. “I’m happy with the way it’s coming along. I have expectations to not be too far behind.” cubs.com.

Lilly was to have the knee checked out late yesterday, and maybe will even have an MRI.