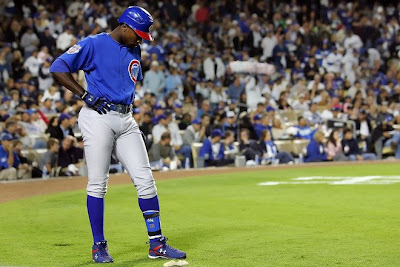 Chicago Cubs outfielder Alfonso Soriano has been quietly recovering from September knee surgery. He battled with problematic legs all season – or so we were told – culminating in the late season procedure. We haven’t heard much from him since, until he showed up at Cubs camp yesterday, telling everyone that, despite having more than five months to recover following surgery, he was still only at about 80 percent.

It was a pretty scary revelation. But Soriano now says he didn’t quite mean it like it sounded.

The Cubs’ medical staff advised Soriano to not run full tilt this winter to avoid any setbacks.

“We’ll see in one week when I test my knee running in the field,” Soriano said. “My knee will tell me how I feel.”

What will likely be the hardest part of Soriano’s rehab will be the mental part. He has to trust that his leg is healthy.

“I say in my mind I’m 80 percent but that’s because I’m not doing anything like playing in the field,” he said. “When I test it, I hope my knee feels better than I think. I think it’s 85 percent. Maybe when I test it, it’s 100 percent.”

Let’s not mince words: Soriano was profoundly bad last year. Not just bad for Soriano, but bad for anyone. For probably the first time in his career, his performance did not even incrementally help his team win. Instead, he took away from the team.

I don’t know anyone who is expecting Soriano to return to the player he was five years ago – or even two years ago. But I think it is reasonable for us to hope that he is much better than he was last year. The Cubs’ lineup is so different with a successful Soriano, and hopefully the specter of Xavier Nady looking over his shoulder will help prod Soriano along the road to recovery.

Then again, Soriano’s already guaranteed $18 million per year for the next five years (sweet Jesus), so maybe he doesn’t care if he gets bumped by Nady.