Why the 2010 Cincinnati Reds Will Suck Skip to content

Editor’s Note: Yes, it’s that time of year again – the time for us to settle back into our protective bubble where the Chicago Cubs are destined for greatness, and every other team in the National League Central is bound for spectacular failure. If you’d care to check out last year’s fare: St. Louis Cardinals, Cincinnati Reds, Milwaukee Brewers, Pittsburgh Pirates, Houston Astros.

The 2010 Major League Baseball season is nearly upon us, and that means two things: (1) we’re all so deprived of real baseball action that we’re willing to treat meaningless Spring Training games like they’re the playoffs, and (2) the prognosticators are out in full force. Yes, every sports publication in the world puts out a season preview. Some are interesting, some aren’t. For the most part, folks just don’t have the time necessary to do the kind of in-depth preview that is going to be of any use to a reader that actually follows the team being previewed.

So most previews end up being pretty surface level, and boring. Well, we’re not going to do that here at Bleacher Nation. It’s much more interesting (notice how I subtly pat myself on the back?) to simply examine why the team currently sucks and is going to suck in 2010.

So enjoy – we’ll be previewing the suckiness (suckosity?) of the other teams in the National League Central over the next five weeks. Up first, the ward of the gentleman to the right: the Cincinnati Reds.

The Reds were 78-84 last year, and wound up 13 games out of first in fourth place. That final record, though, includes a September that treated them famously, and wins in 27 out of their last 40 games. I’ll take “Things that didn’t matter because the Reds were so, so far out of it at that point,” for $400, Alex. Still, as far as the Reds go, the baseline for suckitude has been set fairly high – even with relatively high expectations this year, the Reds will find it difficult to exceed last year’s 78 wins.

Last year, we had this to say:

Um, ouch. I’d say I nailed it if it hadn’t been so easy to predict.

Reds fans in the comments had this to say:

“When was the last time the cubs won a championship??? o yea… that long. To me this article does not tell me why the reds will “suck” instead it tells me that the little cubie nation is a bit nervous!! Dont worry even if you make it to the playoffs, you will just CHOKE again. It’s all Bartmans fault! Ha, when and doubt blame somebody that had no difference in the outcome of the playoffs (typical cubs fans)… whinners! Have fun waiting another 100 years!” -Commenter Ryan

You’ll notice a theme developing throughout the series. Other teams’ fans often seem to be under the misapprehension that the failings of the Chicago Cubs somehow affect whether or not their team sucks. 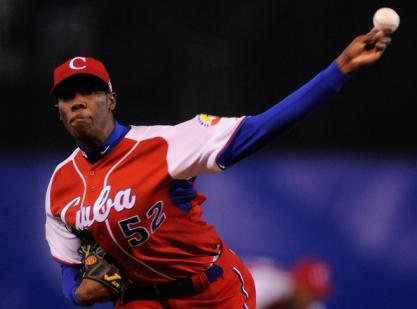 Not a lot going on in this space for the Reds. The big arrival, obviously, is Aroldis Chapman – and he’s but 21 years old, and is not expected to make an immediate impact. It was a good long-term signing, but as for 2010? It’s probably doesn’t do much to de-suck the Reds. The best move the Reds made was dumping Willy Taveras so that Dusty Baker can’t continue to use a guy who can barely muster a .300 OBP at the top of the order because “speed doesn’t slump, dude.”

Oh, but Aaron Miles is probably going to hit .350, just to piss us off.

Their Very Own Blogoverse Thinks They Suck

Though the wider spread optimism surrounding the Reds has clearly infected even its most cynical fans, there are still pockets of pessimism. The lingering signs are embodied well in this Redleg Nation discussion of what should have been received as a low risk, who cares type move:

The Reds have signed Kip Wells to a minor league deal. Oh joy. This can only end badly.

I’m all for minor league filler; there are always injuries and you have to have enough pitchers for the minor league rosters. Perhaps I’m being too pessimistic, but I always have a couple of fears about this type of signing, since I’ve seen too much of this nonsense:

1. What if Wells has a great spring and Dusty decides to hand the 5th spot in the rotation to this “proven veteran”? Wells hasn’t been an effective pitcher in a long time, if ever (look at his stats; I don’t know how this guy is still kicking around the big leagues). He’ll lose some games before the Reds cut bait, and this team’s margin for error is going to be slim.

2. What if they stick him in the AAA rotation, possibly bumping a guy like Matt Klinker?

3. Even if he does start the season in AAA, and even if he is in the bullpen in Louisville, Wells is almost guaranteed to be the first callup when the Reds need a pitcher. This despite the fact that Wells has no business on a major league roster these days.

You don’t become filled with that much trepidation over a Kip Wells minor league deal unless your fears of suck are riding high, even if veiled by hopes and polka dots.

The Suckiest Part of Their Suck

Outside of the skipper’s seat, the suckiest part of the Reds has to be the rotation. Young, live arms? Sure. The possibility of being good? Ok. But can anyone be counted on?

Aaron Harang is now three years removed from relevance, and he’s the purported ace of the staff. Bronson Arroyo is as inconsistent on a game-to-game basis as any starter in baseball. Johnny Cueto has been electric in stretches, but believe it or not, he had a sub-100 ERA+ in both of his first two seasons. Homer Bailey has been the future for half a decade. He was finally given a half of a season to be a full-time starter last year, and he was just OK (4.50ish ERA).

And the five spot is truly a mess of possibilities. Dusty Baker was recently quoted as saying Mike Lincoln, Micah Owings, Justin Lehr, Mike Leake, Matt Maloney, Travis Wood and Aroldis Chapman all have a chance to make the rotation. Chapman is the big name, but very few pundits thought he’d be ML-ready to start the year.

The wild card, of course, is Edinson Volquez, who is rehabbing from Dusty Baker Tommy John surgery. He is not expected back until the second half of the season at the earliest, and even then, will he be the pitcher he was before the surgery?

Ok, ok. So the bench is actually significantly more troubled than is the rotation – but it was more fun to talk about the rotation. And it gave me a chance to talk about Bronson Arroyo’s beautiful, flowing locks. Wait, I haven’t yet? So shimmery…

And in the End

Admittedly, it’s easy to see why the Reds are a trendy pick to challenge the Cardinals at the top of the N.L. Central this year. The lineup is full of young talent, and could put up plenty of runs. The bullpen was excellent last year, and could have a shut-down closer at the end in Francisco Cordero. Even the rotation, my so-called suckiest part of their suck, could come together and be one of the division’s best.

Could is the word. Just could. Because this is a team defined by it’s lack of definition. It’s the questions.

The problem for the Reds is that even their strongest pieces come with question marks. Joey Votto is a premier hitter, but is he over his emotional problems? Jay Bruce is a young stud, but is he ready to make the transition to offensive star? Scott Rolen found himself again when he wound up in Cincinnati last year, but how much more does he have in the tank?

And there are other issues. Is Drew Stubbs ready to take over in center field and (potentially) at the top of the order? Are Orlando Cabrera’s intangibles really enough to overcome his plummeting production and diminishing range at shortstop? How will Dusty Baker sleep at night without Willy Tavares inexplicably at the top of his order?

On paper, the 2010 Reds are one of the better teams in the Central. Or not. But maybe. Maybe not. Who knows? Not me.

So for now: they suck.