Aramis Ramirez Hits Well in Return, But as DH Skip to content 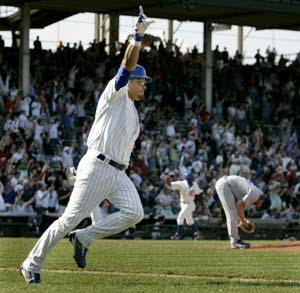 Chicago Cubs third baseman Aramis Ramirez still isn’t quite over his triceps injury. He finally got into some game action yesterday, but just as a DH. Playing third base will have to wait – but he might be ready by Friday.

“I felt pretty good out there today,” Ramirez said.

He has been sidelined because of a sore right triceps muscle and is doing limited throwing. If all goes well, Ramirez will be starting at third on Friday. Piniella would like Ramirez to catch up to the others in terms of at-bats.

At the start of the day, Ramirez and Derrek Lee were the only regulars who did not have at least 20 at-bats. Marlon Byrd and Mike Fontenot already had 34 each. Maybe Ramirez doesn’t need as many as other players?

“I think no matter how good a hitter you are, you do need a certain amount of at-bats in the spring,” Piniella said. “I don’t know how many he has to date but I would hope that between now and the end of Spring Training, we can get him another 30 at-bats or so.”

Ramirez did have five at-bats in the Minor League camp. Piniella wasn’t concerned the arm injury would be a hindrance. Ramirez did miss two months last season because of a separated shoulder but this is different.

“If this was the start of the season, he’d be playing today,” Piniella said of Ramirez. cubs.com.

It’s good to hear that Ramirez is doing some light throwing, and that he could play if this were the start of the season. It sounds like the Cubs are being especially cautious with their most important offensive player.

Still – it’s the Cubs. When Ramirez actually plays another Spring game, and I see him make a smooth throw over to first, then I’ll finally exhale.