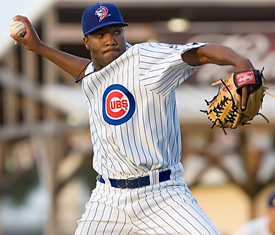 The Chicago Cubs’ bullpen has been far from a success this year. Although it has not been the most observable problem of late – that would be them guys with the bats – the bullpen’s issues are likely to come up time and again this year. Thus, we’ll be hearing about possible reliever trades for a while.

We’ll also be hearing about possible internal options, including a couple of starting prospects at AAA Iowa.

With the Cubs lacking in right-handed relief pitching, two prospects to watch at Triple-A Iowa are starters Casey Coleman and Jay Jackson.

Coleman is closer to the majors right now, but with Justin Berg struggling and Esmailin Caridad off to a poor start, both Coleman and Jackson could be in Cubs uniforms soon. chicagotribune.com.

Jackson is often cited as the Cubs’ second-best pitching prospect (behind Andrew Cashner), and there has not, to my knowledge, ever been a suggestion that he would end up in the pen. Coleman, while he’s been an effective minor league starter, is not considered a top prospect at this point.