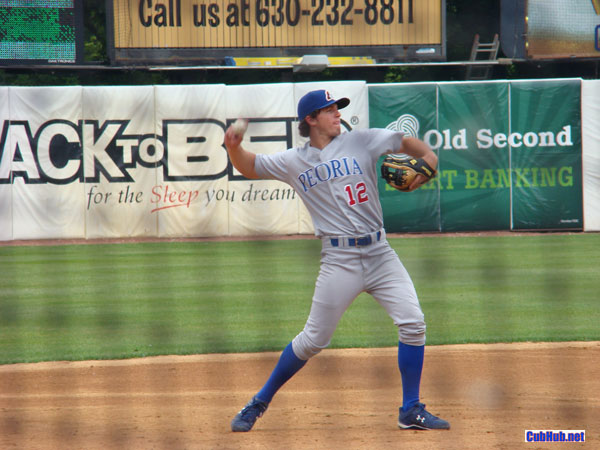 It wasn’t too long ago that the Chicago Cubs’ positional prospect hopes were pinned to third baseman Josh Vitters, not shortstop Starlin Castro. Vitters, who is in his third full season in the system, seems like he’s been slow to develop since being drafted third overall in 2007, but it’s easy to forget that he’s still just 20 years old.

He’s currently working on his game at AA Tennessee, but suffered an injury to his thumb, which hopefully will not delay his continued progress.

Vitters hopes to hone his game this summer and look to a future that has him following shortstop Starlin Castro to Wrigley Field soon.

“Castro did a great job and deserved it,” Vitters said. “This is a great place to develop more and get ready for the big leagues.”

The injury happened when the third baseman misplayed a hot grounder from leadoff hitter Miguel Negron. Vitters was given an error on the play.

“Its just a little swollen. Its nothing serious,” Vitters said. “Ill probably get back out there Tuesday.”

Vitters, the third pick of the 2007 draft, was promoted from Single-A Daytona Beach on May 7 to take the roster spot of Castro after he was called up to the Cubs. He is considered to be at least a year away from being ready for the majors.

The 20-year-old was eighth in the Smokies lineup and did not bat. He entered the night batting .234 with one home run and five RBI in 19 games at the new level.

“Its been nice. I like it a lot,” said Vitters, who hit .291 with three home runs in 28 games at Daytona, where he finished last season. “Its a faster paced game and there is a little better talent.

Surely the Cubs hope Vitters continues to develop and maintains a serviceable glove at third base so that he can replace Aramis Ramirez in 2011 or 2012.