Tom Ricketts: Jim Hendry is the Cubs GM "Going Into Next Year" Skip to content 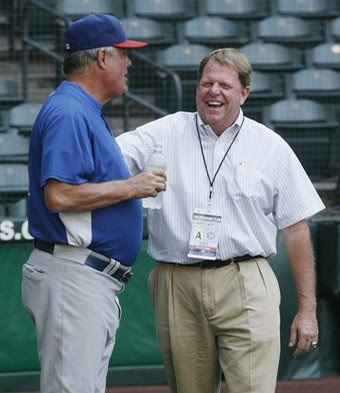 With the announcement that Lou Piniella will retire at the end of this season, Jim Hendry’s status as Chicago Cubs General Manager was bound to receive some new scrutiny for two reasons: (1) he and Piniella are tied together, and as one departs, many believe so should the other in order to start fresh; and (2) the Cubs’ GM will hire the next Cubs manager.

Chicago Cubs’ owner Tom Ricketts says Hendry remains his guy. At least “going into next year.” Which is kind of a weird way to give a vote of confidence.

“When we came in to this organization, I said our opening press conference that Day 1 was square one with everyone in the organization,” Ricketts said. “I think from that day going forward we had a very good offseason. I think Jim delivered on bringing in some players who contributed a lot to this season, and we had a good offseason, no question.

“I think the second thing that gives me 100 percent confidence in Jim is that we have a good organization. The way you win consistently in baseball is to draft well, to develop players well and to bring those players up to the major leagues to give you the flexibility you need with payroll and trades. I think we have the organization in place. I have the highest confidence in everyone in our organization, and I think that speaks well of Jim.” ESPN Chicago.

That sounds like business-speak to me. Ricketts has decided not to fire Hendry, and therefore, Hendry will stick through the season. Then, heading into the offseason, Ricketts is pretty sure that he wants Hendry to make the team’s offseason moves, so he carefully words a defense of Hendry, and says Hendry’s the guy “going into next year.” But he’s left open the door to dismiss Hendry should the offseason look ugly.

Why you would want a lame duck GM to hire your next manager and build your next team is beyond me, though.