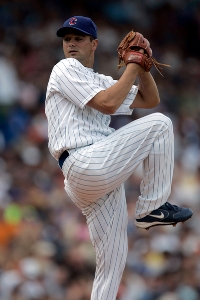 If Chicago Cubs starter Ted Lilly is not traded before Saturday’s trade deadline, it won’t be for a lack of visibility.

Both pitchers are coveted by numerous teams as the trade deadline approaches on Saturday.

At least six teams have interest in Lilly, including the Twins, Tigers, Dodgers and Mets. According to major league sources, the Twins have been the most aggressive team in their pursuit of Lilly, although the Dodgers, who had early interest in the pitcher, may have found a way to pick up the $5.5 million left on his contract. ESPN Chicago.

This is the first we’ve heard of the Twins being “the most aggressive,” but with a stacked minor league system, a trade with the Twins is likely to yield a good return. It will be interesting to learn, over time, which the Cubs were more interested in: getting a team to take the rest of Lilly’s salary, or getting the best return in prospects. The answer could go a long way to setting us up for what the Ricketts Era will be like.

As for Lilly, he put together a 1.80 ERA in his last three starts, so it’s not as though he isn’t helping his cause (ironically, of course, as Lilly wants to stay with the Cubs).