Editor’s Note: This is a guest post, written by a friend of the program, Scarey from Sons of Ivy. When it comes to Cubs prospects, few know the organization better than Scarey, and he’s offered to throw us some of his insights, teed up here for you with minimal editing from yours truly. Up today, the Cubs’ most recent rookie call-up on the, um, rookie call-up cavalcade: infielder Darwin Barney. Barney is expected to take recently-traded Mike Fontenot’s spot on the roster as soon as today or tomorrow.

Darwin Barney is the kind of prospect that scouts like to refer to as a “high floor/low ceiling guy.” He has a great chance to contribute as a Major Leaguer, but he’s not going to be an all star by any means. His contribution is likely to be as an utility player.

The Oregon State product was well thought of as a collegiate athlete where he helped Oregon State win back-to-back NCAA championship titles in ’06 and ’07. He also played for team USA in 2006 and helped to capture the International University Sports Federation tounament championship. The Cubs selected Barney in the fourth round of the 2007 draft, and he quickly made his way through the Cubs farm system, landing in AAA Iowa in less than 2 years.

One will not to be impressed by Barney simply by looking at his minor league numbers. He’s totalled a .707 OPS in the time since being drafted. Barney’s value stems from his defensive abilities. On the standardized scouting 20-80 scale, several scouts and publications have stated Barney is a 70 or 80 in terms of fielding. One Baseball America article reads, “Though his arm and range are just average, he’s the best defensive infielder in the system, thanks to his instincts, ability to read balls off the bat, fast hands and a quick release.” Reports vary on his arm being average to above average. 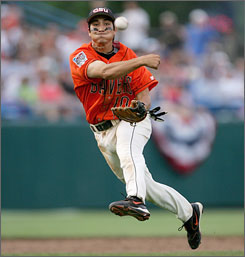 His bat may not be his best asset, but it is likely to be serviceable in the Majors. Barney hits to all fields and has a line drive swing with very little power. Early on, Barney was flying out too much and was instructed to keep his bat level through the zone which helped him to drive the ball instead of undercut it. He’s not a going to walk incredibly often, but can make good contact. In 1662 plate appearances in the minors, Barney struck out just 192 times. His speed is better than average, but he utilizes it more as a base runner than a base stealer.

A Major League comp I often like to make is Jack Wilson. He’s not going to wow you often with the bat or in the field, but is an incredibly consistent defender with good contact and decent speed. The current trend with Major League shortstops seems to be going back to the all defense/meager offense type as it was before the steroid era. As a result, Barney could be intriguing as a starter for a team that doesn’t have Starlin Castro and a glut of short stop prospects in the minors, as the Cubs do.

It’s still more likely that he will be a very good utility infielder for the Cubs. Indeed, Barney would be extremely lucky to have a career as successful as Wilson’s.