Unsurprisey Surprise: Tyler Colvin Working Out at First Base Skip to content 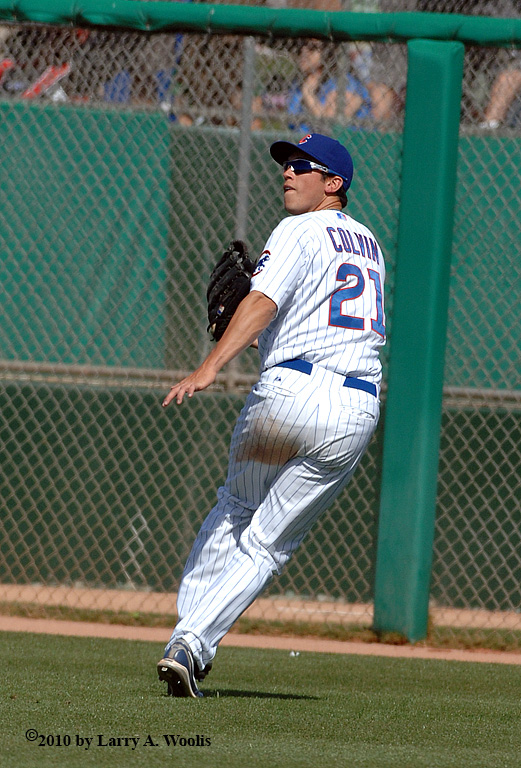 As we fans looked ahead to 2011, on the assumption that Derrek Lee would not return to the Chicago Cubs, we had a collective head-scratching session on who would be his replacement. One name that kept popping up is outfielder Tyler Colvin. Sure, he hasn’t played first base since his sophomore year in college, but he’s tall, athletic, and a lefty. And perhaps more importantly, he’s shown a bat that could work at first, and the Cubs could more easily replace him in the outfield (internally, that is) than Lee at first.

Well, our speculation has been on the money, as the Cubs have started working Colvin out at first base.

“He’ll get some ground balls over there, and we’ll do that for a couple days and see how he feels and how he does,” Cubs manager Lou Piniella said. “If we can look at him over there, it gives the new people a head start on what the options are.”

The “new people” would be the new manager and coaching staff for 2011. Piniella is retiring after this season.

Cubs bench coach Alan Trammell, who works with the infielders, only made a few suggestions during Colvin’s workout Thursday, saying the athletic rookie looked comfortable.

How did Colvin feel?

“There’s a big difference between taking ground balls off a fungo and taking line drives from Ryan Howard,” he said. “That’s what I have to get used to.”

He used his first baseman’s glove from college, which his grandfather had sent him earlier this year, as well as a new Wilson A2000 model he was trying to break in. Before batting practice, Colvin was asked if he had been secretly taking grounders at first just in case.

“At night,” he said with a straight face. “We’ve been practicing at midnight with no lights, which makes it tougher.” cubs.com.

As for Colvin being the actual answer at first base next year, I doubt that’s the Cubs’ plan. More likely, they’re simply giving themselves more options should the search for a first baseman after the season prove fruitless.