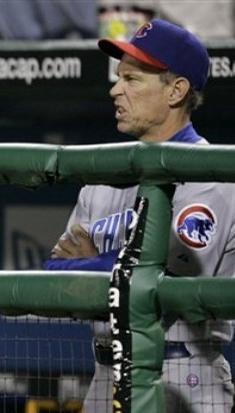 Caught in the periphery of the Chicago Cubs’ impending managerial decision is what will happen to the current coaching staff. Hitting coach Rudy Jaramillo, who signed a big money three-year deal last year, isn’t going anywhere. But pitching coach Larry Rothschild ($400k+ option) and bench coach Alan Trammell could be headed elsewhere. Trammell in particular may have another opportunity brewing with the Diamondbacks.

Another possibility is Trammel could join Kirk Gibson on the Arizona Diamondbacks’ staff. Major league sources told ESPNChicago.com that Gibson would like his former teammate from the 1984 World Champion Tigers to join him as he prepares for his first full season as Arizona’s manager. The Diamondbacks [named] Gibson as their next manager on Monday.

Trammel had a 10-minute conversation with Cubs general manager Jim Hendry before Saturday’s game in Houston, discussing the dynamics of Hendry’s pursuit of a new manager and Trammel’s pursuit of gainful employment in 2011.

Trammel has also coached for the San Diego Padres, where he worked for general manager Kevin Towers. Towers was named the Diamondbacks general manager two weeks ago. Chicago Cubs Blog.

With those kind of overt connections in Arizona, and an uncertain situation in Chicago, no one could blame Trammell for bolting. There may also be a little bitterness that Trammell was never considered for the Cubs’ managerial role, but as Trammell is the consummate professional, that’s not likely.

In any event, the Cubs’ staff is not likely to be completed until deep in the winter.