Why Didn't You Bid on Sammy Sosa's Corked Bat? Skip to content 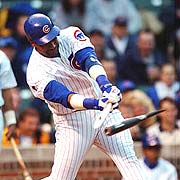 Apparently few were interested in acquiring a piece of Chicago Cubs infamy. The barrel of Sammy Sosa’s broken corked bat failed to sell at auction this weekend when it didn’t meet its suspected modest reserve price of $15,000.

Former Cubs pitcher Mike Remlinger, who owns the controversial bat, had a secret reserve auction price in place, and reportedly that amount was not reached by the close of bidding.

Grant DePorter was the high bidder at $14,407. The CEO of Harry Caray’s Restaurant Group used the secret bidder name of Charles Murphy, the Cubs’ owner in 1908. DePorter said he wonders “if the auction was corked” because Remlinger reportedly was hoping to fetch $15,000 for the bat. Chicago Tribune.

You would have thought some deep-pocketed White Sox or Cardinal fan would cough up some dough to have the bat, but instead it’s a Cubs fan trying to buy it.