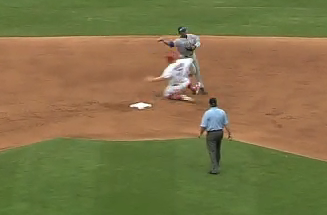 Matt Holliday may not have stuck around long enough to talk to the media after today’s game, but the recipient of his dirty, take-out slide did.

“I was hurt on the ground and didn’t think too much about the runs,” Castro said of the play. “[Holliday] was really out of the base [path]. He didn’t have a chance to touch the base. He slid hard, real hard. It wasn’t clean.”

Castro was very nearly injured on the play.

“It’s only OK because he had a rubber cleat,” Castro said. “If he had a [steel cleat], he would have cut me.”

As for manager Mike Quade, who was ejected after arguing that Holliday interfered, he, too, was upset by the play.

“I applaud somebody who will go in hard to try and break up a double play,” Quade said. “But my thing is, it’s not a legal slide to me. The way Starlin was clipped, in retrospect, the bag was the last thing on his mind. They don’t [call an out] unless it’s blatant. The rules are there for a reason.”

Holliday batted later in the game, but wasn’t subjected to so much as a brushback. Whether that changes in tomorrow’s series finale remains to be seen.