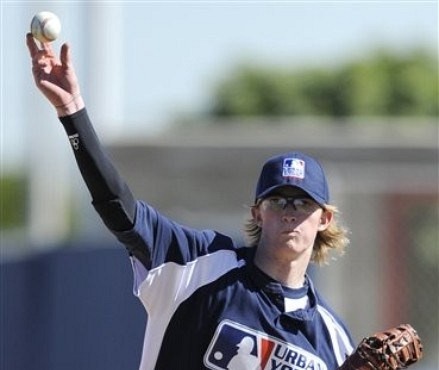 As we enter the weekend, it’s likely that a flurry of announcements will be on the way soon. The sense remains that the Cubs have locked up/will lock up the majority of their overslot picks. The big names as of yet unsigned (or unannounced) include first rounder Javier Baez, second rounder Dan Vogelbach, 11th rounder Shawon Dunston, Jr., 14th rounder Dillon Maples, 39th rounder Ricky Jacquez, and 41st rounder Austin Urban.

Missing from that list is seventh rounder Trevor Gretzky, whom the Cubs signed weeks ago, but whose contract was voided for reasons unknown. He’s not on the list, because now he’s officially signed. Gretzky received $375k (more than double the slot recommendation), so the Cubs clearly wanted him in the fold.

As for the two active Twitters on the list, Dunston and Jacquez, each is still suggesting indecision at best, and a preference for school at worst. Jacquez yesterday tweeted, “As the deadline nears my decision narrows and Texas most likely is my option. Who knows anything can happen!!” You read too much into the tweets of a teenager at your own peril, but, to me, that reads more like posturing and/or having fun than a legitimate statement that he’s more likely to attend Texas than sign with the Cubs.

You’ll recall that, a few weeks ago, a rumor made the rounds that the Cubs had already locked all of these kids up, and it was just a matter of getting a approval from the Commissioner’s office before they would be announced. The genesis of that rumor was a poster at BleedCubbieBlue, who has not backed off his prediction. The poster has already been right on a few guys that others thought would not sign, so he’s earned a bit of credibility.

The deadline is Monday at midnight EST.