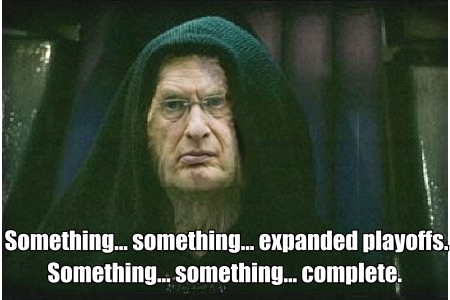 The Emperor/Commissioner Bud Selig recently discussed the status of various collective bargaining agreement issues (the current agreement is up this Winter), and tip-toed around two issues of particular interest around these parts: realignment and expanded playoffs.

To the realignment issue first (it is a precursor to expanded playoffs) – the reason it is of particular interest to Chicago Cubs fans is because realignment is necessarily going to begin with the National League Central. Although the relative crappiness of the Central for years has masked an implicit imbalance in baseball, the time is coming to recognize that a 16-team National League and a 14-team American League, and, worse, a six-team NL Central and a four-team AL West, are simply unfair. It seems now that most in baseball are on board with realignment, but the logistics are a nightmare.

Before we can even get to the scheduling problems associated with two, non-integrated 15-team leagues (because teams play in series, either teams will have to have odd/longer breaks, or an AL team will have to be playing an NL team at all times), there is the obvious primary question: what team(s) go(es) where? No team is particularly interested in moving. So, is realignment really inevitable?

Because Selig is hoping to implement some variation of an expanded playoff (an additional Wild Card team is the most frequently-cited model) within the next two years, realignment is also likely on the way soon.

Indeed, a source says, prospective incoming Houston Astros’ owner Jim Crane (who is being vetted by MLB) is softening on his stance that the Astros not move from the NL Central to the AL West. That move, of course, would be the simplest solution to the realignment question. Selig and MLB could condition Crane’s acceptance into the brotherhood upon his agreement to move the Astros to the AL West.

From there, expanded playoffs would look like a lock.

“I hope to have it next year,” Selig said of expanded playoffs. “It will depend on a whole series of things. The holdup is working out all the details.”

The details, according to Yahoo’s sources, make an additional Wild Card team unlikely for the 2012 season. But Selig will be working hard to have it in place by 2013, which will be – according to him – the first MLB season after his retirement in December 2012.

So, it looks increasingly likely that the landscape of professional baseball will change a fair bit over the next two years – which could be perfect timing for a certain revamped team on the North side of Chicago.