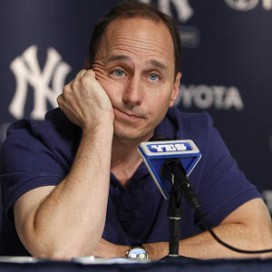 [This series intends to introduce you to each of the legitimate Chicago Cubs GM candidates, and give you a quick, clean rund0wn of the most important information to know about that candidate as the Cubs’ search process continues.]

Current Role and Contract Status: New York Yankees General Manager since 1998, signed through 2011. He currently makes $2 million per year, but that’s sure to go up.

Record in Current Role: The Yankees have the made the playoffs every year under Cashman except once, and have won the AL East 10 times. They’ve also won six AL Pennants and four World Series titles. They are, after all, the Yankees.

Notable Prior Experience: Cashman is a Yankee lifer, having started with the organization as an intern in 1986 while he was in college. By 1998, he’d worked his way up the ladder to GM.

Reason(s) for Including as Candidate: Big market GM, very successful, and is a “free agent” at the end of the year.

Pros/Hype: His teams win. He handles the pressures of New York with aplomb. He has an eye for which top talent is worth paying top dollar to acquire, and the Yankees’ farm system is perennially in the top 10 in baseball. Money plays a part in that, too, but it all starts with the man in charge.

Cons/Cynical Criticism: The Yankees were likely to win with a $200 million payroll no matter who was choosing the players. Cashman has never demonstrated that he can win with less than that behemoth budget. (Then again, as the Cubs of recent years have proved, outspending your competitors alone does not a winner make.) There’s also a timing problem. The Yankees are going to make the playoffs, and, if they make a run, it could be a long time before the Cubs would even get a chance to speak to Cashman. Indeed, the Cubs might wait him out, only to find he isn’t interested.

Desirability: Very high. I get the cynicism – I really do. But I think some of the cynics don’t fully appreciate how much pressure Cashman faces from the owners, the media, and the fans in New York. He’s working to please seven different layers of audiences with, at times, competing agendas, and he’s proved that he can do it. The money, of course, helps. But not everyone is cut out to manage a $200 million budget, either. Spending is one thing; spending wisely is another. And Cashman has, by and large, spent wisely in his time with the Yankees. Does anyone truly believe that, if Jim Hendry were handed a $200 million budget, the Cubs would have made the playoffs 12 out of 13 years? I don’t.

Likelihood/Probable Outcome: Most sources believe Cashman has no intention of actually leaving New York. He may be mildly perturbed by some of the Steinbrenners’ decisions, but he’s well-supported, well-compensated, and he’s in his hometown. It’s possible he’ll go as far as an interview with the Cubs, but I have a hard time seeing him taking the job, rather than simply using it to get a little more green from the Yankees.