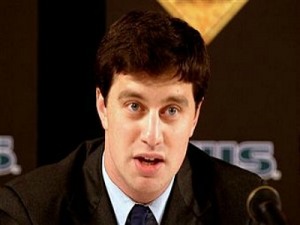 [This series intends to introduce you to each of the legitimate Chicago Cubs GM candidates, and give you a quick, clean rundown of the most important information to know about that candidate as the Cubs’ search process continues. Previously: Brian Cashman, Theo Epstein.]

Current Role and Contract Status: Tampa Bay Rays General Manager since November 2005, “free agent” after 2011. His current salary is unknown, but it’s probably less than the $1.5/2 million made by his peers in Brian Cashman and Theo Epstein.

Record in Current Role: The Rays have made the playoffs twice under Friedman (including the first time in the franchise’s history), making it to the World Series in 2008. The Rays were deeply under .500 in Friedman’s first two years in charge, but have had winning records ever since.

Notable Prior Experience: Friedman is a Rays lifer, having started in the organization in 2004 as the Director of Development, and then becoming the GM a couple years later at the tender age of 28 (you want to feel like a failure? Just think about all that Friedman and Theo Epstein accomplished before their 30th birthdays … bastards). Before he came to work for his friends at the Rays, Friedman was a financial analyst at Bear Stearns and private equity shop, MidMark Capital. Friedman is proof that, sometimes, being super smart can be enough to achieve.

Reason(s) for Including as Candidate: While his current success as a GM probably precludes our calling him “up-and-coming,” Friedman is a young, brilliant, hotshot executive, deeply in the mold of what Tom Ricketts professes to desire. The fact that he comes from a financial analysis background – as does Ricketts – can’t hurt.

Pros/Hype: Friedman has overseen the transformation of the Rays’ organization from perennial laughing stock to perennial contender, all while playing against the big boys in the AL East. More impressive, the Rays’ Opening Day payroll has never been higher than $72 million (last year), and he has the Rays in the race again this year despite slashing that payroll to something just north of $40 million.

Cons/Cynical Criticism: Friedman’s success with substantially less resources is doubtlessly impressive, but he’s done it in front of a ballpark two-thirds empty. He’s done it before a media that easily impressed, and light on the criticism. He’s done it under an ownership group with exceedingly low expectations. Friedman has never had money to spend, so how exactly would he know best how to spend it? The history books are not overflowing with examples of dominating small market GMs who’ve successfully transitioned to a large market.

Desirability: Very high. While the cynism is fair, I have a hard time believing that a guy like Friedman, who is bright enough to build the Rays into what they are, having had no background in baseball, would somehow be too dim to work wisely with money. While the “edges” to be gleaned in Major League Baseball are shrinking every year, I am tickled to think about what Friedman might be able to do, not only with a larger payroll budget, but with a larger scouting and analysis budget. I suspect he could do well.

Likelihood/Probable Outcome: The chances Friedman is the Cubs’ next GM is, unfortunately, low. Like Epstein and Cashman, I have no doubt that Friedman is a guy for whom Tom Ricketts is content to wait. Friedman, looking squeeze additional dollars of Rays ownership – be those dollars for his own pocket or for his team’s payroll – may even consider taking an interview with the Cubs or the Houston Astros. But would he actually leave? His closeness to Rays owner Stuart Sternberg and team president Matt Silverman, among others, would make it a tough sell. Still, the challenge, the resources, and the escape from AL East hell could be enough to entice him. For those keeping score at home, I’d put the chances of Friedman at just slightly better than Theo Epstein, who is himself just slightly more likely than Brian Cashman. None of the three, mind you, is a particularly likely.