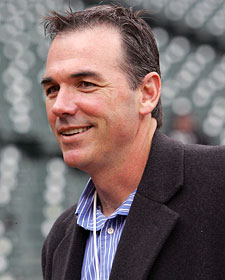 [This series intends to introduce you to each of the legitimate Chicago Cubs GM candidates, and give you a quick, clean rundown of the most important information to know about that candidate as the Cubs’ search process continues. Previously: Brian Cashman, Theo Epstein, Andrew Friedman.]

Current Role and Contract Status: Oakland A’s General Manager since 1998. His current salary is something north of $1 million per year, and he’s under contract through 2014. He also holds a 4% ownership interest in the team.

Record in Current Role: The A’s haven’t had a winning record in half a decade, but, before that, the team was a constant playoff contender under Beane’s watch. They made the playoffs five times in the first seven years of the 2000s, but advanced beyond the first round only once (in 2006, before being swept by the Tigers in the ALCS).

Notable Prior Experience: Beane is an Oakland A’s lifer, at least as far as his executive experience goes. He started as an advanced scout before becoming an assistant GM under Sandy Alderson in the early 1990s. Before that, Beane was a terrible baseball player, bouncing around in six seasons as a reserve outfielder. Beane was famously the Red Sox’s first choice for GM in the early 2000s before he backed out, leaving the job to Theo Epstein.

Reason(s) for Including as Candidate: Beane is considered the father of the use of modern statistical analysis in big league front offices, whether that title is deserved or not. With his recent years in Oakland marred by an ownership group that is unwilling to spend until a new stadium is opened (and a stadium that won’t be opened until MLB helps the A’s out, which has been some three years in waiting), many speculate that Beane is ready to move on to something else.

Pros/Hype: Setting aside the zeitgeist associated with the ‘Moneyball’ movie, Beane has been a big name in the baseball world for a long time – and deservedly so. He’s smart, able, successful, and willing to take chances. Doesn’t that sound like the kind of guy who could finally do it for the Cubs? Beane combines a background in scouting with his current understanding of statistical analysis, and surrounds himself with assistants who help drive his model.

Cons/Cynical Criticism: Beane’s recent celebrity obscures his recent failures. The A’s have been terrible for a number of years, and, given Beane’s claim to fame, it’s hardly fair that he could use ownership’s refusal to spend big bucks as a shield. His team has not had a winning record in five years. How much credit does Beane deserve for the A’s success in the early 2000s, and how much credit goes to the prior regime, which drafted huge talent? Sure, Beane helped develop Hudson/Zito/Mulder, but any team with those three was going to win some games. Further, like the three previous candidates in this series (Epstein, Cashman, and Friedman), Beane would cost the Cubs big bucks. He’s a part owner of the A’s, after all.

Desirability: High. With Beane’s background and personality, it’s impossible to see him not being an upgrade in Chicago. While he’s running the show in a smaller market, he is always the subject of intense scrutiny, and has been since the 2003 publication of ‘Moneyball’ (the book). Rather than wilt under that pressure, he’s flourished. Call it a hunch, but he feels like a guy who could excel under the thumb of Chicago fans and media. I like that he’s got a great deal of experience (albeit in one place), and comes from a scouting background (but isn’t married to the scouting approach).

Likelihood/Probable Outcome: Low, but higher than Epstein/Cashman/Friedman. While many speculate that Beane would be all too happy to look around, it’s just that – speculation. He apparently enjoys being out West, and let’s not forget: he did turn down the Red Sox once. Maybe a great deal has changed since then, but if past is prologue, the Cubs might find him uninterested in taking the leap – Beane has been a part of the A’s organization for 23 years. You’ve also got to wonder whether Beane’s outsized personality might clash with an owner who clearly wants to be involved in baseball operations. I suspect Beane is a guy whom the Cubs will target for an interview, and, I’d say it’s better than 50/50 that Beane takes the interview. From there, of course, anything can happen.