Take the Grain as You Must: Late Night Scuttlebutt Has Theo Epstein Coming to the Cubs Skip to content 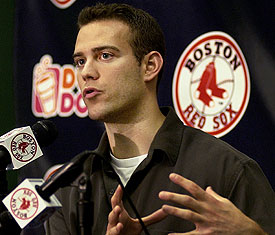 Some two hours ago, I was dancing at a friend’s wedding. But now, I’m sitting at my computer frantically typing about the possibility of Boston Red Sox GM Theo Epstein – previously thought not a possibility for the Cubs, then a possibility, then not a possibility again – coming to the Cubs, and soon. Joel Sherman of the New York Post was so confident that he said this:

“I am shocked, but in last 36 hrs every exec talk to says believe #Redsox will give permssion and Theo will go to #Cubs to be GM.”

I don’t want to drive everyone into a late night frenzy from which they cannot recover, but I thought it worth passing onto you as I heard it. I’m sure we’ll have plenty more tomorrow.