The Theo Epstein Saga: A Question of Leverage Skip to content 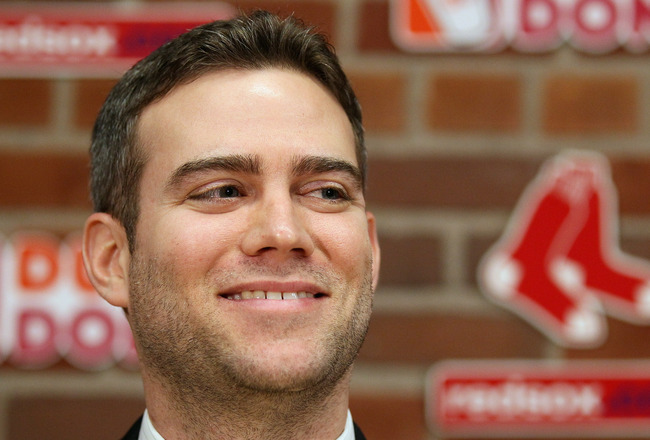 The word of the day, apparently, is leverage. Specifically, the issue is whether leverage exists in the present discussions between the Chicago Cubs and the Boston Red Sox regarding compensation in exchange for Epstein’s services in 2012, and, if so, who has it. Because discussions have degraded considerably in the last two days (reports say Red Sox President Larry Lucchino is taking things personally, and is out for blood), whichever side has the stronger fallback position probably has the upper hand in negotiations.

According to the Boston media, any leverage that exists falls in the Red Sox’s favor. Case in point, Peter Abraham today writes that “the Sox have all the cards. Ben Cherington is running the baseball operations department and appears to have the full confidence of ownership. They can let Epstein and the Cubs stew as long as they want.”

Thus, those falling on this side of the leverage question would say, “the Red Sox would be wise to let the Cubs twist in the wind until they acquiesce and offer up the pick of the prospect litter.”

And yet, I keep coming back to the same thought: would the Red Sox actually risk the financial, public relations, and prospect hit by cutting off discussions with the Cubs?

Red Sox owner John Henry has already publicly said that Theo Epstein is leaving Boston. He’s also already started the local narrative that things need to change for 2012. It is unfathomable that Epstein could return to the Boston in any meaningful role.

In other words, the only real “leverage” the Red Sox have is to break off talks with the Cubs, let Cherington continue on as GM, force Epstein to sit out the 2012 season (or “work in the mail room”), and pay him his $3+ million salary in addition to his $3.5 million “closure” bonus. Oh, and did I mention that they’d make themselves out to look like the greatest villains in all of sports? Can that really be called leverage?

I’d call it a nuclear option.

But it exists, and, when framed that way, I suppose the Red Sox do “hold all the cards.” After all, there’s no response to it. Right?

Well, if we’re getting extreme, how about this response?

What if the Cubs were to reach out – quickly, if not already – to a prospective GM candidate who, regardless of his role, would like to work with the Cubs and for Theo Epstein? What if the Cubs were to bring that candidate on board now – role to be determine – leaving them with a visible back-up plan for 2012, should Theo be forced to sit out next year and sign with the Cubs after the season? After all, if Ben Cherington’s presence gives the Red Sox leverage, would not, for example, Rick Hahn or Josh Byrnes’ or Dan Evans’ presence on the Cubs neutralize that leverage? The rub, of course, is finding a guy who would be willing to play that part, and who is adequately accomplished to actually run the Cubs for a year (read: not Randy Bush). A second rub, I suppose, is the presumption that Epstein is indeed willing to come to the Cubs in 2013, rather than kicking the tires on any other open gigs.

If the Cubs could find the right guy, then the worst case scenario is a 2012 season run by a kind of interim GM, who knows that, come 2013, he’ll be serving under Epstein. The titles could be tricky, but are, in most respects, entirely academic. Whether the interim guy is the “General Manager,” and Theo comes in as the “President of Baseball Operations,” or the interim guy is actually just called the “Interim General Manager,” is largely a matter of semantics. The point is: the Cubs would have a legitimate fallback plan to which to point if the Red Sox continue to puff up and threaten the Cubs to sweeten the pot.

This would undoubtedly change all questions of “leverage,” and could leave the Cubs sitting pretty. It could swing things so decidedly in the Cubs’ favor that, not only do the Cubs give up less in terms of prospects, but Epstein may also be able to choose a couple of his favorite Red Sox employees to come on over with him to Chicago. And, they’d have a GM-calibre front office talent ready and waiting to work alongside Epstein. Win-win-win.

You’ll note, making this kind of move is more about putting the Cubs in the best possible position to call the Red Sox’s bluff (in case, you know, it isn’t a bluff) than it is about actually bringing someone else on board to run the team in 2012. It hinges on having an attractive GM candidate not named Theo Epstein willing to come to the Cubs under these complex circumstances.

Maybe it’s a pipe dream, and maybe the differential in prospects is not worth the effort. Or maybe I’m just looking to take my mind off of Michigan’s atrocious performance at Michigan State today. But if the Red Sox’s demands are outrageous, here’s hoping that the machinery is in motion.

It’s at least worth discussing, eh?