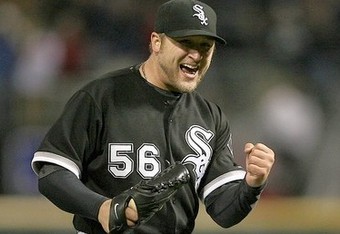 A few weeks ago, rumors popped up that the Chicago Cubs could be interested in lefty free agent, Mark Buehrle, assuming the price wasn’t astronomical. The Cubs are known to be in the market for a starting pitcher or two, so the rumor made some sense.

Then again, Buehrle, who turns 33 before next season starts, is a career-long White Sox pitcher and a life-long Cardinals fan. Would he really come to pitch for the Cubs?

Well, the Cubs must think so, because according to sources, team officials have met with Buehrle’s agent. Twice. Without going overboard, I can tell you that a team tends not to expend the time and effort necessary to prepare for, and follow through with, a second meeting with a player’s agent unless there is a hint of a chance that the two sides could put something together. It, of course, doesn’t mean Buehrle is coming to the Cubs – it doesn’t even mean the Cubs will actually make him an offer. It simple means there’s a chance.

And the Daily Herald’s White Sox beat writer, Scot Gregor, thinks that chance is a realistic one. “Rumors run rampant at this time of the year,” Gregor wrote, “but this one has some juice.” Gregor added that the Cubs make sense for Buehrle because of Buehrle’s family, and the life they’ve built in Chicago for the past 12 years.

So, what about that astronomical price thing?

It’s possible. Given Buehrle’s success without an overpowering fastball (he sits in the mid-80s), the aging process may not affect him quite as dramatically as it does other pitchers.

Still, if the choice is a 33-year-old Buehrle for four years and $56 million and 31-year-old CJ Wilson for five years and $80 million, I’m not sure which direction I’d go. Buehrle has the long, consistent track record, but he doesn’t have the upside of Wilson. He’s also got a whole lot more tread on the tires than Wilson, who had his success while pitching in a ballpark historically unfriendly to pitchers.

There’s also the man to be considered. I mentioned the White Sox and Cardinals thing above, and, while they aren’t reasons not to pursue a player who you believe can help your team win, they’re not non-existent. Buehrle has been a relatively unabashed Cubs-disliker for a long time, and he’s not a particularly popular player among Cubs fans. If he comes to the Cubs and starts out slowly, how long of a leash do you think fans will give him? I don’t know for sure, but I can say confidently that the leash will be much shorter than it would be for a guy who hasn’t spent his life loving everything that Cubs fans are trained to hate.

The Cubs, of course, are not the only team pursuing Buehrle – as many as 10 other teams are interested.