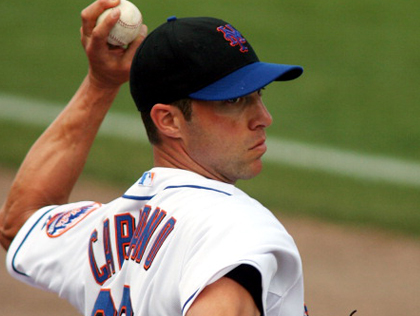 One of the hallmarks of the Jim Hendry era was a predilection for reclamation project pitchers. Chad Fox, Wade Miller, BJ Ryan, Chad Fox, Ryan Dempster, Chad Fox, Chad Fox … the list goes on. It was, in fact, one of a few Hendry strategies that I really liked. The risk in taking on a pitcher whom no one else wants, at least not on a Major League deal for big dollars, and who has something to prove – because of injury, ineffectiveness, whatever – is quite low. The upside, excepting Ryan Dempster, is usually fairly low, too. But “it doesn’t hurt to try.”

We’ll have to see how the new front office feels about reclamation projects.

The Mets took on a reclamation project of their own before the 2011 season: lefty starter Chris Capuano. Out of the bigs for two years prior to 2010, Capuano returned to his long-time team, the Brewers, for an up-and-down 2010 season, where he pitched more out of the pen than the rotation. After that year, few teams wanted to take a serious chance on an uncertain commodity like Capuano, but the Mets signed him on a one-year, $1.5 million deal.

The results were mixed. While he was healthy enough to make 31 starts, Capuano’s ERA was just 4.55, ERA+ just 82, and gave up 198 hits in 186 innings. Still, he hardly walked anyone, and struck out an impressive 8.1 batters per nine innings.

Whether Capuano, now a 33-year-old free agent, still qualifies as a reclamation project, and whether Jim Hendry would have taken a chance on him, are both now academic questions. Debate them if you’d like, but they don’t much matter at this point.

What matters is that the Chicago Cubs, under Theo Epstein and Jed Hoyer, are interested in Capuano, according to sources.

Capuano was little more than an average lefty in his time with the Brewers, before falling off the map in 2007, having his second Tommy John Surgery, and then pitching his way back in the minors. At one point, Capuano’s Brewers lost a jaw-dropping 26 straight games in which he made an appearance. A rabbit’s foot this guy was not.

So where do things stand today? Well, as I said, he pitched to mixed results last year, struggling overall, but showing well in the walks and strikeouts areas (the most important areas for a pitcher, according to Jed Hoyer). The Cubs could use a lefty in their rotation to give other teams a different look, but adding a lefty just to add a lefty is never a good idea. If the Cubs’ rotation stayed as it stands going into 2012, and the Cubs added only Capuano, does a Garza-Dempster-Zambrano-Wells-Capuano rotation really do much for you? Didn’t think so.

Adding someone like Capuano would be, I suspect, more about depth than about a guaranteed starting spot.

If Capuano is an inexpensive option, he could make for an adequate swingman in the Cubs’ bullpen, and, as last year demonstrated, you can never have too much starting pitching depth. In other words: As a guaranteed starter? Meh. As depth? Sure.

The Cubs aren’t the only team in on Capuano. The Dodgers have long been connected to Capuano as they look for inexpensive pitching options.