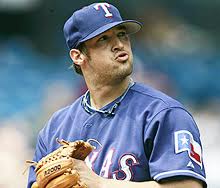 The relatively undisputed top free agent arm on the market this year is Texas Rangers’ starter CJ Wilson, who, at age 30, dominated the AL this year to the tune of a 2.94 ERA, 1.187 WHIP, and 206 Ks in 223.1 innings. The Chicago Cubs have a fairly obvious need in the rotation, but, to date, hadn’t really been connected in rumors to Wilson outside of a cursory meeting with his agent a couple weeks ago (i.e., back when Wilson’s agent met with as many as a dozen teams).

The Fox Sports duo of Ken Rosenthal and Jon Morosi reports that the Cubs have spoken to Wilson’s agent, and have sought to “gauge the market” on Wilson. Rosenthal further reported on MLBN that the Cubs are “a new entrant” into the Wilson sweepstakes, and are interested.

Wilson, now 31, has been discussed here before, and is in line for a serious payday given the week starting pitching market this year. Indeed, multiple reports say he’s already received a six-year offer, presumably approaching $100 million. For a guy who’s had only two seasons as a starter – only one of which was ace-level – that’s a pretty steep commitment.

Still, Wilson was long a great reliever before becoming a starter, and, by virtue of his time in the pen, has significantly less tread on the tire than your average 31-year-old starting pitcher.

For me, with Wilson, it all comes down to the contract (I know, when isn’t that the case?). At five years and $75 million, he’s clearly someone the Cubs should pursue as neither a short-term quick fix, nor a long-term payroll burden.

But at six years and $100 million? The upside is suddenly diminished, and the risk becomes too much to take. I’d bet a shiny nickel that the Cubs aren’t the team who’s offered him six years already.

The Cubs’ offseason plans remain quite the mystery – adding a pitcher like Wilson suddenly makes the “go for it in 2012” case that much more strong, and makes the possibility of trading guys like Matt Garza and Geovany Soto remote.