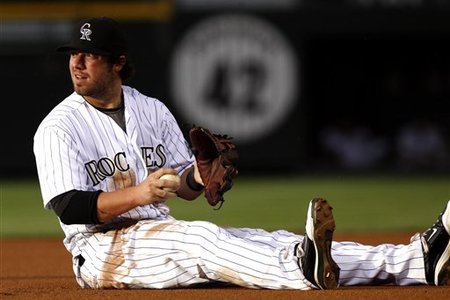 Maybe it is but a coincidence, but, commensurate with the news that the San Diego Padres had acquired Colorado Rockies’ closer Houston Street for some cash and a PTBNL today*, there are reports that the Cubs have renewed their interest in third baseman Ian Stewart. At last check, talks between the Cubs and Rockies had all but died for the time being.

If the timing isn’t a coincidence – and isn’t about the Rockies looking to clear additional salary after taking a first step in dumping Street – then you can bet it’s about Padres’ third baseman Chase Headley, who has been rumored the Cubs’ top third base target this offseason. Headley, 27, is an excellent defender who offers a great deal of offensive upside outside of PetCo Park. He remains under contract for three years.

With Street in the fold, the Padres don’t need Marmol. Maybe they never wanted him. But, if they did, the Cubs are now down a big trade chip if they were hoping to pick up Headley.

Russell and a prospect or two (the right ones) could probably still get a deal done, but the timing of the talks about Stewart certainly suggests the Cubs are lining up their options in response to the Street deal. If the Padres no longer want a closer, and won’t take the other players the Cubs are offering, they can move on to Stewart.

Or, at least that’s what they want the Padres to know.

Stewart, 26, is an average defender at third, and offers offensive potential (for the most part, not realized yet), but few believe he’s the Cubs’ preferred option at third base. He’s under control for three more years, but will make as much as $2.5 million in arbitration next year (going up from there). Some believe there’s a chance the Rockies will not tender Stewart a contract next week, making him a free agent. That is all to say: if the Cubs do acquire Stewart, it won’t be (and shouldn’t be) for much.

*UPDATE: Despite multiple reports that the deal was done, Jayson Stark says the Rockies are still talking to at least one other team about Street. Presumably, they’re trying to squeeze a little extra cash out of the Padres.