Obsessive Prince Fielder Watch: Cubs Are Still Interested ... or Are They Throwing Up Multiple Smokescreens? Skip to content 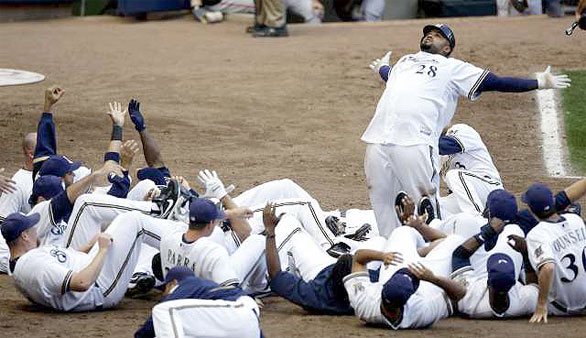 Yesterday, the buzz was all about newly-displaced San Diego Padres’ first base prospect Anthony Rizzo, and the Cubs front office’s connection thereto. With Yonder Alonso taking the reigns at first base for the Padres, suddenly Rizzo was without a job – and the Cubs, among other teams, came a-calling.

But, like, aren’t the Cubs already in pursuit of a certain older, heftier, more certain (and more expensive) free agent first baseman?

Yes, the Cubs are still pursuing Prince Fielder, according to ESPN’s Bruce Levine, who spoke to the matter on his Saturday morning radio show, and wrote an article to the same effect. As I suspected, manager Dale Sveum’s comments that the Cubs hadn’t spoken to Fielder were literally true, according to Levine’s source. The distinction is that the Cubs’ brass has been speaking with Fielder’s agent, Scott Boras, and not with Fielder, himself. Sveum’s comments didn’t really mean much – except that he’s been well-coached by the new men in charge.

But, at the same time that Levine was saying the Cubs remain interested in Fielder (and ESPN’s Eric Karabell was guessing Fielder winds up with the Cubs, as many other members of the national media have guessed), the St. Louis Post-Dispatch’s Joe Strauss was writing that the Cubs’ interest in Fielder was merely a smokescreen. For what, exactly, Strauss didn’t say.

Throw in yesterday’s Rizzo wrinkle, and it becomes brutally difficult to know just what the Cubs are hoping/planning to accomplish. As usual, it’s virtually impossible to separate fact from concoction, legitimate interest from diversion.

Is it possible that the Cubs’ discussions with the Padres about Rizzo are a mere pressure point, designed to spur Prince Fielder’s camp to action, and to accept a shorter-term deal with the Cubs? Yup. It’s possible.

Is it possible that the Cubs’ pursuit of Fielder is a smokescreen, designed to up his price and pressure other teams/players to make a move with the Cubs? Again, it’s possible.

The truth is known only to a select few, but that doesn’t preclude us from thinking plainly and logically.

By all indications, including Theo’s own words, the Cubs are looking to build for the future. They want to compete in 2012, if possible, but not at the expense of “the future.” Does signing Prince Fielder make sense within that universe? Sure – if he’ll take a shorter-term deal. Does trading for Anthony Rizzo make sense in that universe? Absolutely.

To my mind, the Cubs have a preference out of those two, but it may not be a simple black and white. Fielder for five years may be preferred over Rizzo at a steep trade price. Rizzo as part of a large deal that stocks the team with young pitchers may be preferred over Fielder at six years. To suggest that the truth is as simple as “X is merely a smokescreen for Y” is, to me, both naive and inexact.

I see no reason why the Cubs could not be legitimately interested in, and pursuing, both options simultaneously. Whichever options slides into their acceptable range – Fielder accepts fewer years than he wants, or the Padres accept less for Rizzo (or a larger deal becomes available) – the Cubs will take it.

And if neither falls into that range, they’ll move on to something else.