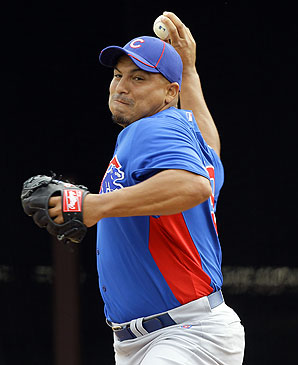 Earlier today, Chicago Cubs President of Baseball Operations discussed, among other things, the circumstances of Carlos Zambrano’s return to the Cubs. It was a best behavior kind of thing.

According to Ken Rosenthal (and a rumor out of Venezuela we discussed on Twitter earlier today), the Cubs and Marlins are “close” to consummating a trade that would send Big Z to Miami where he could pitch for his good friend, Ozzie Guillen.

Zambrano, 30, is owed $18 million in 2012 (the final year of his contract, setting aside a virtually unobtainable 2013 vesting option). If the Cubs are hoping to pick up anything of value at all in the deal, they’ll have to kick in substantial cash. Even then, I’d keep expectations low – the market for Zambrano, to the best of our collective knowledge, consisted of Miami, and … Miami. Zambrano has a no-trade clause, so the Cubs were probably very limited in their options. With that kind of leverage, it’s not likely Miami will give up much of note.

Apparently the rumor had been floating around Venezuela for a little while, but the only reporter to cover it couldn’t get confirmation from the Marlins on a possible deal. So, it kind of died on the vine.

But, with Rosenthal reporting it, I’d imagine this has legs. I’ll update when more is available.

UPDATE: I checked around with a couple sources, and while the final, final details of the trade are not, well, finalized, the rumor is legit. The two sides are close.

UPDATE II: It just occurred to me – those vague rumors that Zambrano was sitting out Venezuelan Winter League starts because of a leg injury? Any chance that was a cover story for an impending trade, and a new team that didn’t want him pitching any  more this year?

UPDATE III: Dave Kaplan reports that his sources are also telling him that a deal is in the works.

UPDATE IV: Enrique Rojas says (as speculated in the comments) that the return player being discussed is pitcher Chris Volstad. A Zambrano-for-Volstad swap was discussed back in December.

UPDATE V: Joe Cappozi (a Miami writer) says there’s a chance the Cubs could land Matt Dominguez in the deal, which would be insane. I think he’s just speculating, rather than saying what he’s heard from a source.

UPDATE VI: Jon Heyman says he also hears Volstad is headed to the Cubs. (Volstad, by the way, has been a mediocre back-end pitcher for three straight years now, and is in his first year of arbitration.) Note that getting Volstad wouldn’t help the Cubs’ 40-man roster bloat.

UPDATE VII: Joe Cowley says it’s a “wrap,” but I guess we’ll have to wait a bit longer for the final details.

UPDATE VIII: Bruce Levine says it’s a Z for Volstad swap with the Marlins taking on just $3 million of Z’s salary. I know the Cubs’ options were limited, but oof. I’ll still take it, but harder to call it a “win.” A Marlins writer says the Cubs are eating ALL of Z’s salary, but pretty much everyone else (Kaplan, Rosenthal) say Cubs are eating $15 million.

FINAL UPDATE (probably): I’ll have more on the trade tomorrow, but my instant reaction is that, while I would have liked to have seen more salary relief, the Cubs had no leverage. Zambrano has a serious image problem. The Cubs are known to want to move him. Zambrano also has a no-trade clause. With those confluent factors, the Cubs were never going to get much for Z, assuming they felt they had to move him (and, clearly, they did). So they got a little salary relief, and a cost-controlled, high upside, low success, 25-year-old pitcher. I’m not jumping up and down or saying things like “I can’t believe they got this much” (which was my reaction to the Marshall trade), but I’m fine with it. Perhaps after more analysis, I’ll break more firmly in one direction or the other.