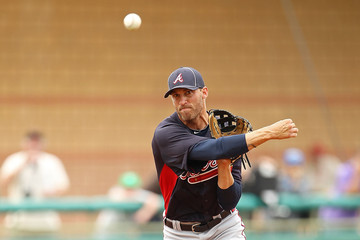 Mather, 29, split 2011 between the Atlanta Braves and Colorado Rockies’ organizations. You may recognize his name as a former Cardinals farm-hand, who never quite put it all together. He had a good year with the Cardinals in 2008, but it’s been nothing but the minors and an occasional (unsuccessful) stint in the bigs since then. Most of Mather’s value comes from his ability to play all over the diamond, seeing time in the last couple of years at every outfield position, as well as first and third base. He hit quite well in the PCL (AAA) the last two years, but, then, who didn’t?

The most exciting thing you’ll read about Edgar Gonzalez, 33, is that he’s the older brother of Adrian. The excitement ends there.

Gonzalez last saw time in the bigs in 2009 with the Padres, playing all over the diamond, and hitting not terribly (his .255/.312/.381 MLB line doesn’t look like much, but he’s got a 91 OPS+ (Darwin Barney was at 83 last year (just sayin’))). He hasn’t been able to crack the bigs again since then, spending the interim years crushing it in the PCL. Like I said: everyone hits well in the PCL.

Obviously these moves are minor – both in a literal and figurative sense – but that doesn’t mean they aren’t also good. Although you want your upper levels of the minors to be full of prospects, the Cubs simply don’t have an abundance of upper level, top prospects. That means, unless they are going to continue the past practice of aggressively promoting youngsters, the Cubs were going to need some AAA depth. Thus, even if these guys never contribute at the big league level (and, to be clear – it’s nice to have them as depth in that regard, too), it’s good to have them in the organization. They aren’t really blocking anyone.

Throw in the fact that both can play all over the diamond in a pinch, and it’s nice to have guys like that at AAA, just in case.