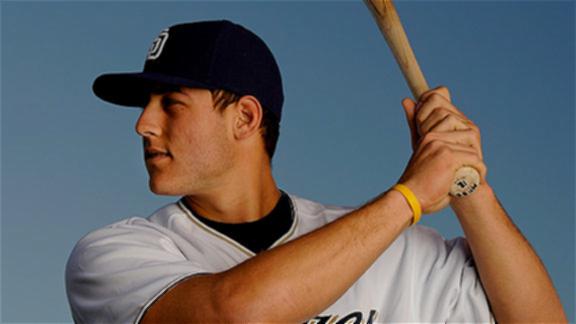 The Chicago Cubs’ front office has not so secretly coveted 22-year-old first base prospect Anthony Rizzo from the Padres since Yonder Alonso took Rizzo’s job. And now they’ve got their man.

Rizzo has been discussed here at length before, but here’s a notable selection:

Rizzo, who just turned 22 in August, is the top prospect in a very, very good Padres’ system. Rizzo was a top 100 prospect in all of baseball going into 2011, and then all he did was put up an eye-popping .331/.404/.652 line, with 26 homers and 34 doubles in just 93 games. Those numbers are great even for the PCL, particularly for a 21-year-old. Before 2011, Rizzo’s minor league numbers were good, if unremarkable, but he was young at every level, and was consistent after each promotion. Rizzo is also believed to be an above average defender at first base.

Rizzo was called up late last year for a cup of coffee, and struggled mightily, hitting just .141/.281/.252 in 153 plate appearances (love that IsoD, though, eh?). Very few saw that as a reason for concern, however.

Rizzo was drafted by the Red Sox under Theo Epstein, Jed Hoyer and Jason McLeod, so their interest is, of course, understandable. Given his age and lack of success in the bigs last year, it wouldn’t be surprising to see the Cubs let Bryan LaHair break camp as the Cubs’ starting first baseman, giving Rizzo additional time to develop at AAA. Otherwise, Rizzo is the Cubs’ starting first baseman right out of the gate, and, yes, almost certainly takes the Cubs out of the running for Prince Fielder.

Cates, who just turned 22, was the Padres’ 3rd round pick in 2010 (again, Hoyer/McLeod), and spent 2011 in A ball, pitching adequately, if unspectacularly. Cates struck out 8.5 per 9, which is great, but walked 4 per 9, which is not. Obviously the new guys in charge must have been fans.

Cates is probably a fair swap for Na, 20, who is himself a legit prospect. A quality young outfielder, Na has a great deal of upside, but is still a long way from the  Majors. Given the Cubs’ depth in low-minors outfield prospects, Na was expendable.

Going into 2011, he was primed for a breakout season in the rotation. His first start didn’t disappoint – or, at least, it wouldn’t have, if it hadn’t been his only start. Recurrent rotator cuff issues ended Cashner’s season, and he was set to pitch out of the pen in 2012. To be sure, Cashner is an extremely talented pitcher, but, given the injuries and the likelihood he’d be in the pen in the near-term, he was a piece the Cubs could afford to shop. If Cates is a fair swap with Na, landing Rizzo for Cashner is likewise a fair move.

Given the Cubs’ long-term needs, and the relative depth of their pen, I can’t call this anything but a win for the Cubs. It was probably also a win for the Padres, which is just fine with me.

Obviously I’ll have much, much more on this trade in the coming days.