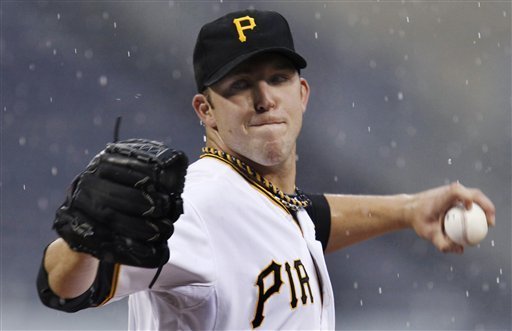 UPDATE: Paul Maholm spilled the beans on his (verified) Twitter account tonight, letting the world know that he was coming to the Cubs, and thanking Pirates fans for their support. The terms of the deal are yet unannounced, and his deal won’t be finalized until a corresponding 40-man roster move is made to open up a spot for him. Maholm says he’s looking forward to, among other things, the Cubs Convention this weekend.

Bruce Levine and Ken Rosenthal are reporting that the Chicago Cubs are working on signing 29-year-old lefty starter Paul Maholm, with Rosenthal saying a source tells him a deal is “close.”

There have been rumors of the Cubs bringing in Maholm for a while now, but the lefty apparently wanted to shop around a bit before settling in with the Cubs.

If the Cubs do sign Maholm, there are two matters of “space” to be considered. First, there is the 40-man roster, which currently stands at 40 (without Kerry Wood), though there are at least a couple arms who could be jettisoned if there isn’t a commensurate trade made to open up a spot for Maholm.

The second “space” issue is squarely in the Cubs’ rotation. Yes, Maholm is coming back from shoulder trouble, but there have been no indications that anyone is pursuing him as anything other than a starting pitcher. If that’s the case, the Cubs will have at least six sure-fire starting pitchers in Matt Garza, Ryan Dempster, Randy Wells, Travis Wood, Chris Volstad, and Paul Maholm. The Cubs have repeatedly said they want to accumulate starting pitching depth, but signing Maholm feels more like an indication that one of the other five starters – most likely Garza, Dempster, or Wells – could be on the way out. It’s theoretically possible that Wells could work in a swing role – or Wood or Volstad, I suppose – but I doubt it.

Maholm, 29, is coming off a solid, if unspectacular season, which saw him put up a 3.66 ERA and 1.294 WHIP in 162.1 innings. His 105 ERA+, only the second above-average full season in his career, suggests he was only marginally better than OK, though. On the right contract – read: cheap – Maholm could be a fine back-end of the rotation type, especially if he’s paired with an improved defensive infield (he’s a ground ball pitcher who doesn’t strike too many out).

The rub with Maholm?

He pitched only 162.1 innings last year because his year ended early with a shoulder strain (though Dr. James Andrews found no serious structural damage). He was cleared for workouts in late October, but there’s no guarantee he’ll be as effective when he returns next year.

It tends to be the case that, when you get multiple reports that a deal is “close” with no details beyond that, the writers with the info are already typing up their “Cubs sign Maholm” articles. Chances are a deal is coming soon, and probably for a couple years and something in the low teens of millions. I’ll update this post if the signing happens.