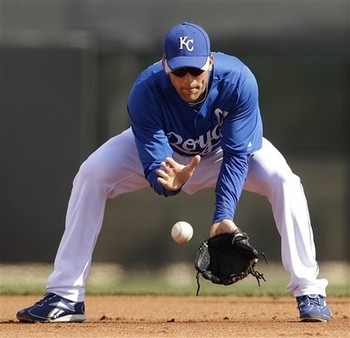 Earlier this offseason, the Chicago Cubs claimed infielder Jeff Bianchi – a top Royals prospect as recently as 2010 – off of waivers. The Cubs were expected to need some middle infield depth (they still do, quite frankly), and Bianchi is a very good defender with some upside at the plate. He had just turned 25.

Well, forget all of that.

Today, the Brewers claimed Bianchi off waivers from the Cubs, which move was necessary to open up a spot for recently-signed Paul Maholm. I would have expected one of the many marginal arms on the 40-man roster to get the boot, but instead, it’s Bianchi. The move only further solidifies Darwin Barney’s questionable grasp on the second base job.

You’re probably wondering why the Cubs would claim Bianchi last month only to waive him shortly thereafter. The answer can probably be answered only by those in the know – and they are few – but I would imagine it’s a multilayered answer. On the one hand, Bianchi is a fringe roster player as it is (hence his original waiver by the Royals). On the other, the Cubs probably knew there was going to be a great deal of roster turnover in December and January, and figured that Bianchi bought them some additional opportunities. When certain moves didn’t pan out, or certain Cubs players stuck around longer than expected, the Cubs were forced to make a tough choice on the roster front. That’s probably all there is to it.