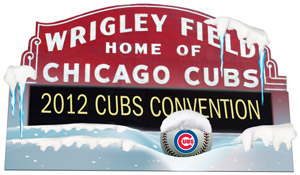 I will be excitedly heading off to the Cubs Convention (my first) tomorrow morning.

I’m not exactly sure how I’ll be “covering” the Convention. I expect to be relatively busy – both as a writer and as a fan – so I might not be able to write about the Convention until after it’s over. I expect, at a minimum, to write about the experience early next week. In the interim, there should still be normal weekend posting (limited, but existent, today, Saturday, and Sunday).

I also expect to be tweeting during the Convention and possibly posting pictures and such to Facebook. It kind of just depends on how it goes. But, yeah, that’s the plan. So follow BN on Twitter, and like it on Facebook if you don’t want to miss any of that stuff.

If you are attending the Convention, and want to say hey, look out for me. I’ll be wearing my blue Bleacher Nation shirt (on Saturday, anyway), will probably have a jaw-droppingly gorgeous woman at my side (my wife may also be with me), and I will generally look like this: If you see me just after meeting Theo Epstein, however, I will probably look more like this: But if the Cubs have just announced that they bought John Grabow out of his minor league deal with the Dodgers and plan to make him “the seventh inning guy,” I will almost certainly look like this: And if I just scored a touchdown that won the Cubs the Super Bowl, I’ll probably look like this: If you still can’t tell if that guy you’re looking at is me, I’ll be wearing the most spottable kicks I could find: So, if you want to meet up, where should you go? I get the sense that most Convention-goers head to Kitty O’Shea’s (a bar in the Hilton) in the evening on Friday, so that’s where I’m planning to go. I’m thinking of getting there on the early side – maybe 7ish – and then heading back to the festivities to see Theo Epstein (around 8pm), before heading back to the bar.

If that changes, or if Kitty’s isn’t going to work, I’ll be sure to Tweet where I’m headed and drop it in the comments here. This is not to say that I’m so important that you should be falling over yourself to meet me (indeed, meet me in person and you’ll see just how unimportant I am), but, if you want to meet up with other BN’ers, I figure I might as well be the rallying point.

If you’re going to the Convention and plan to try and meet up, go ahead and post it in the comments. That way we can all have a general sense that we should be looking for one another, rather than skulking around wondering if anyone else there is a part of the BN community.