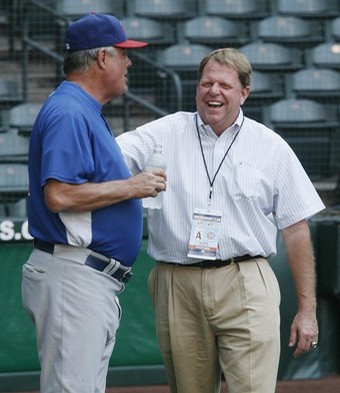 A Major League source tells Bruce Levine that Hendry will be joining the Yankees’ front office as a Special Assistant to GM Brian Cashman. Hendry’s deal is for more than one season. Hendry, 56, previously said he was offered a number of opportunities after being dismissed by the Cubs last Summer, but chose to take his time before wading back into baseball. Being a special assistant with the Yankees is about as good as re-entry into the workforce gets.

Hendry was with the Cubs’ organization in various roles for 17 years, and was GM for his final nine before being fired with one year left on his contract in July (Hendry stayed on until late August). Whatever the Cubs owe Hendry will now be reduced by the value of his contract with the Yankees for 2012, which is a side bonus for the Cubs.

But the main bonus is seeing a good guy like Hendry land on his feet. Hendry lost my support as GM many years ago, but I never thought ill of Hendry as a man, and as a scout. Whatever kind of executive Jim Hendry is, the Yankees are certainly getting a great guy and friend.

Best of luck to Jim, and a hearty thanks for not taking any inside knowledge to another team in the NL Central.