Obsessive Jorge Soler Watch: Could He Really Get Free Agency After His Initial Contract? Skip to content 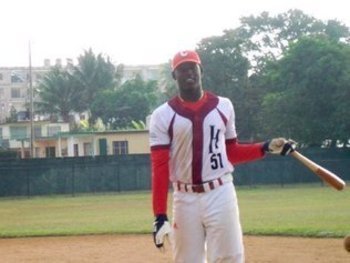 Now that we’ve resigned ourselves to accepting the fact that the Chicago Cubs aren’t the only team aggressively pursuing 19-year-old studly Cuban prospect Jorge Soler, we can dispassionately (ha, right) view rumors about his future team when those rumors don’t say things like “the Cubs are the favorite” or “the Cubs have all but signed Soler.”

Enter Yahoo’s Jeff Passan, who is usually fairly on the money. First, he discusses Soler’s free agency, generally, and a few teams in on him:

While no team technically is allowed to offer Soler a contract – he has yet to be cleared by the Office of Foreign Assets Control – teams surreptitiously let it be known what they’re willing to pay. And that is a boatload for a player expected to spend a couple of years in the minor leagues.

When reports from the Dominican Republic said Soler would sign with the Chicago Cubs for four years and $27.5 million, the dollar figure didn’t seem altogether ridiculous, not after the Oakland Athletics gave 26-year-old outfielder Yoenis Cespedes a four-year, $36 million deal. It’s the years that made the reports dubious, the idea that any team would let a 6-foot-3 (or 6-foot-4, depending on the source), 200-pound potential star hit free agency at 23 years old.

Anyway, limiting the market for Soler at this juncture would be self-defeating. According to two sources, the New York Yankees and Philadelphia Phillies – the teams with payroll Nos. 1 and 2 in the major leagues this season – have expressed the keenest interest in Soler. A Cubs official confirmed they’re smitten by him as well, and as we’ve seen with the last two big-time Cubans – Cincinnati’s Aroldis Chapman and Cespedes – you can’t forget the low-revenue teams.

Ok, the Yankees and Phillies might be the most interested teams in Soler. Other sources say otherwise, but it’s plausible. Add that to your database.

But then Passan suggests a bombshell.

OFAC’s unblocking process takes time and is inconsistent, so Soler could hit free agency next week – or maybe next month. When he does, the offers will pour in – more of the six- and seven-year variety since the interest in Soler will almost ensure he receives a contract that grants him free agency at the end. He’d be 25 or 26, still a pup.

Passan is talking about the kind of contract Yoenis Cespedes received from the A’s – one in which he’s guaranteed free agency after the end of the contract, regardless of his service time (Cespedes’ four-year deal ensures that, even if he’s in the bigs the whole time, he will not achieve the six years otherwise required for free agency). Those contracts are, to put it mildly, exceedingly rare. In fact, Cespedes was the first Cuban to get such a deal (before him, only a very small handful of Japanese players received such a luxury).

Does Soler – at 19 – really have that much leverage? Consider that, a typical international signing would see a kid get a huge bonus, and maybe even some big league-level money while he makes time in the minors, if he’s lucky. From there, whenever he did make the Majors, his team would get the usual six years of big league control (during which he’d be paid better than most, because his salary couldn’t go down more than 20% (in other words, he wouldn’t be making the Major League minimum in those first three years like everyone else)). Thus, signing the kid to a four-year deal could provide as much as 10 years of total team control (if he spent those first four years in the minors).

Is Soler so special, or these circumstances so unique, that a team could justify giving such a young player a six or seven-year deal, after which he’s free to hit the open market? He’ll spend two or three years in the minors, at least, so, imagining that he gets – let’s say – six years and $36 million, the team is essentially agreeing to pay him $12 million per year for three years when he finally reaches the Majors. You don’t need me to tell you that’s crazy.

But it’s just as likely that the dubious part is the idea that a team would sign Soler to the kind of deal that grants him free agency after just six or seven years.