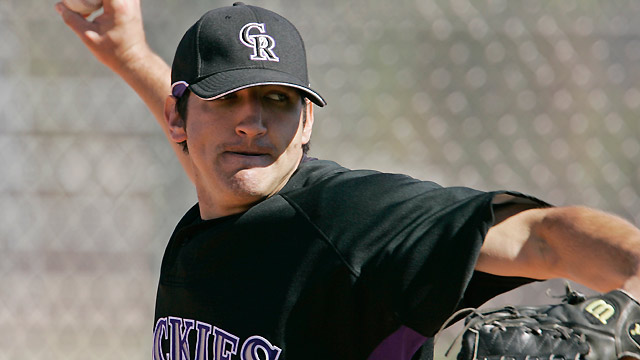 Yesterday, together with officially signing Cuban pitcher Gerardo Concepcion and adding him to the 40-man roster, the Chicago Cubs removed pitcher Casey Weathers from the 40-man, which now stands at 39.

The Cubs received Weathers, 26, in a December trade with the Colorado Rockies. You’re more likely to remember that trade for the other guy the Cubs got – Ian Stewart. But Weathers was, at the time, still considered a legitimate prospect (despite his age, Weathers was still working his way through the minors thanks to a mid-career Tommy John surgery).

Weathers hasn’t seen too much game action this Spring (two innings), and, given that most 40-man rosters are full at this point in the year, it’s not terribly surprising that the Cubs were able to take him off the 40-man and assign him to AAA Iowa without losing him (if, that is, he was subject to waivers – which, given his injury history, and MLB service time (none), I’m not sure he would be).

The move, you’ll note, was not necessary for the Cubs to add Concepcion to the 40-man roster – there was already an open spot, courtesy of the Boston Red Sox and Chris Carpenter. So, the 40-man now stands at 39, which could come in handy should the Cubs want to add a non-roster invitee to the team out of Spring Training (for example, Blake DeWitt, whom Dale Sveum already discusses like he’s a member of the bench).

Or, yes, you could speculate about a future addition of, say, a big-time Cuban outfield prospect to the 40-man.